Book Review: I Love My Computer Because My Friends Live in It

April 7, 2017 by ConcertKatie No Comments 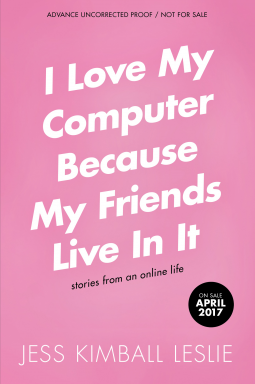 I was pretty pumped to read “I Love My Computer Because My Friends Live In It” because I could totally relate to the title.  Unfortunately I was expecting more about the friends in the computer than I got, although I could totally relate to almost everything the author was writing about since she is only a few years older than me.  Replace her Bette Midler online chat rooms with Hanson and you’ve got me. She even went to Oklahoma to meet up with someone she had met online – I do that yearly.  The book became more about her life and how technology played a big part in it than what I was expecting with more about the relationships and friendships she had made through the internet.  Jess is funny though, so I really enjoyed her dissection of twitter, facebook, instagram, etc.  We are both from Connecticut and both have engineers for Dads so when my friend thought that perhaps I wrote this book, she really wasn’t too far off.  The only difference is she is married and met her wife on match.com, and while I’m not looking for a wife I have tended to shy away from dating sites.  The rest of our lives do seem to parallel though so maybe I should give it a try….

I Love My Computer Because My Friends Live in It is tech analyst Jess Kimball Leslie’s hilarious, frank homage to the technology that contributed so significantly to the person she is today. From accounts of the lawless chat rooms of early AOL to the perpetual high school reunions that are modern-day Facebook and Instagram, her essays paint a clear picture: That all of us have a much more twisted, meaningful, emotional relationship with the online world than we realize or let on.

Coming of age in suburban Connecticut in the late ’80s and early ’90s, Jess looked to the nascent Internet to find the tribes she couldn’t find IRL: fellow Bette Midler fans; women who seemed impossibly sure of their sexuality; people who worked with computers every day as part of their actual jobs without being ridiculed as nerds. It’s in large part because of her embrace of an online life that Jess is where she is now, happily married, with a wife, son, and dog, and making a living of analyzing Internet trends and forecasting the future of tech. She bets most people would credit technology for many of their successes, too, if they could only shed the notion that it’s as a mind-numbing drug on which we’re all overdosing.