April 5, 2017 by ConcertKatie No Comments 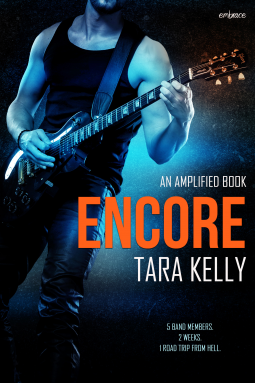 When I started reading Encore I had the feeling that I had already read it.  It turns out this is a second book in a a series and I had previously read Amplified as part of the Good Groupie’s rock reading novel club. The beginning of the book is a bit of a recap with what is going on in Jasmine’s life – she bluffed her way into a band after being kicked out by her father.  Now her father is coming to visit – and well, she may have bluffed to him about the genders of the band members she is living with…

This story revolves around the band on tour, mostly on the west coast and dealing with traveling in the van, figuring out when to shower and dealing with crazed fans.  In addition to the story there is also snippets from the bands social media, a blog they are keeping while on tour as well as some of the nice and not so nice comments from “fans”.  There is one crazy fan in particular, Jeremy, who takes a liking to Jasmine and offers to show her around when they are in his home town.  Except he takes things a little too far and ends up showing up everywhere – both online and off.  But that is just one of the conflicts that the band has to contend with on twitter.  The lead singer seems to have a breakdown on stage, resulting in them being kicked out of the venue. Another band member gets beat up while they are on an off day for what he is wearing.  There is of course the will they / won’t they conflict of Jasmine and Sean… and of course Jasmine’s Dad giving her an ultimatum and her running off to join the band is still looming over her as well.

I thought this book was a fun and quick read, it seemed somewhat realistic to the tour life (not that I’ve ever been in a band on tour but it seemed to match what I think it would be like.)  There are characters to love and hate and some in between as well.  I am looking forward to more stories from Tara Kelly.

I lied my way into a band, humiliated them on stage, and got my heart broken by the bassist. Now…we’re on tour together.

Of course my dad, who I haven’t seen since he kicked me out, makes a surprise visit the day before we leave. Spoiler alert: It doesn’t go well. I have to quit the band and go to college or he’s cutting me out of his life for good.

This tour is the best opportunity we may ever have – and it’s already a disaster. We’re broke. We can’t stop fighting. And being in such close quarters to Sean isn’t exactly helping me get over him. Even though we’re just friends now, every time our fingers brush or our eyes catch, my heart betrays me. He’s the kind of distraction I can’t afford to have right now…no matter how much I wish things were different.

This is one road trip that will be hard to forget…