January 6, 2017 by ConcertKatie No Comments 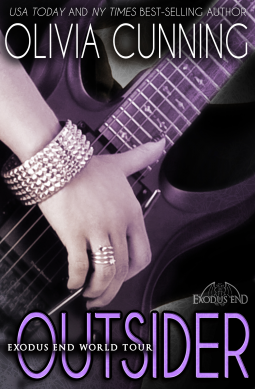 Outsider is a book that I was really, really looking forward to reading as I really loved the book that came before it, Insider.  I could have done with a bit of a recap in the beginning of the story as there was a lot that had happened that I couldn’t really remember if I knew the backstory on or not.  Otherwise, I think the book should work as a standalone even without having read Insider.

This story focuses on a thrupple – Regan, Ethan and Trey.  Information ends up leaked about their relationship and many think that it is because Toni, who is following the tour to write an interactive biography did it.  If I remember correctly, this also was a major plot point in Insider, which I thought was resolved, but apparently not.  Trey ends up proposing to Regan to try and take the heat off of Ethan and Regan seeming to be in all the tabloids.  A lot of drama follows and Ethan ends up not showing up for the wedding and they think it is because he doesn’t approve of the two of them getting married without him.

I have to say that I enjoyed Insider a lot more – but it may have just been because I related to Toni more as she is writing about a band and can related less to the 3-way relationship storyline in this book to pretend I’m a part of the story.

Reagan Elliot should be living her dream…She’s touring with Exodus End as their new rhythm guitarist and gaining more notoriety and fame than she ever imagined possible. She’s earned the devoted love of not only one, but two spectacular men. Her committed threesome with sexy guitarist Trey Mills and her hunky bodyguard Ethan Conner is stable, loving, deep, and satisfying for all involved.
But sometimes the world sees things differently and is determined to destroy what it doesn’t understand.
Can Reagan’s relationship with Trey and Ethan survive the cruel backlash of the media, her family, and a bigoted public? Or will the talented musician lose everything she holds dear in the face of her own burgeoning doubts?
Outsider is the second book in the Exodus End World Tour series. It’s also the sequel to Double Time, the fifth book in the Sinners on Tour series and a NYTimes best-seller.