December 16, 2016 by ConcertKatie No Comments 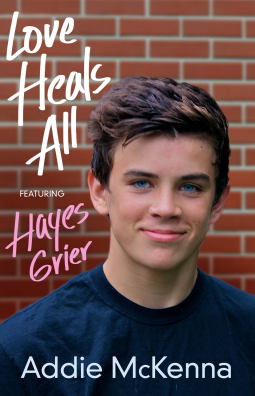 I have to preface this by saying I am well aware that I am not the demographic that this book is going for.  But I was curious when I saw this book was “featuring” Hayes Grier, who I believe is a Vine star.  I’m not much of a vine user and I don’t really “get” these kids that are famous for just making videos on Vine and Youtube (read: I’m too old) but either way the book sounded somewhat interesting so I gave it a go.

Unfortunately, I couldn’t get past 25% of the book.  I did try, several times, to continue it – but my rule is to not waste time forcing myself to get into books so right around the time when our main character decided that she was “handicapped” and wanted to kill herself seemed like a great time for me to bow out – since I am permanently handicapped and this girl just fell off a trampoline…

The book was a bit of a throw back for me too – it reminded me of the fanfic that my friends and I used to write when we were 14, 15 years old.  The only difference is we didn’t try to get published and I’m not sure anyone would have published it anyway.  But you always had a boyband – say NSYNC – which had 5 guys and you’d be the main character and then you’d write in ALL your friends so they could be dating a band member.  Had more than 5 friends? Oh hey, maybe LFO or Backstreet Boys showed up too.  This book definitely had that going on – and on top of it all – it jumped from ones person’s point of view to another and each time they had their first chapter they’d start it off with a “Hi, I’m soandso and I look like this and blahblahblah” instead of having it written from one point of view and some character development.  I typically don’t mind books that jump between two points of view – but this one was just out of hand.

I have to hand it to the author for getting out there and writing and getting published but this book just completely missed the mark for old me.

Autumn moves across the country and struggles to fit in as the new girl in school. When she crosses path with a fellow teenager, Hayes, and falls hard for him, it seems that her dreams have come true. But what happens when Hayes skyrockets into social media fame with his brother, Nash? Suddenly immersed in tours, YouTube, Twitter, and Hollywood, Autumn and her friends have to deal with online drama and the life-altering issues daily pressure that teens face with today. Can her and Hayes’s relationship survive?