Book Review: Every Day I Fight

December 30, 2016 by ConcertKatie No Comments 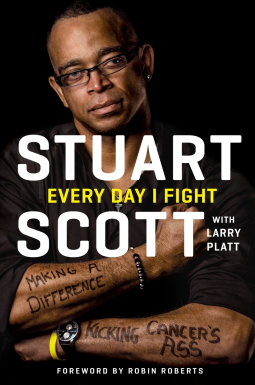 Stuart Scott passed away in early 2015, shortly after finishing work on his memoir, which has now been published as “Every Day I Fight”.  Not only did Stuart fight against cancer – he even went to the gym after his cancer treatments! He fought to get to where he was in his every day life before the cancer diagnosis as well.  I found this book to be very inspiring and thought provoking.

“When you die, it does not mean that you lose to cancer. You beat cancer by how you live, why you live, and the manner in which you live.” – Stuart Scott

Shortly before he passed away, on January 4, 2015, Stuart Scott completed work on this memoir. It was both a labor of love and a love letter to life itself. Not only did Stuart relate his personal story—his childhood in North Carolina, his supportive family, his athletic escapades, his on-the-job training as a fledgling sportscaster, his being hired and eventual triumphs at ESPN—he shared his intimate struggles to keep his story going. Struck by appendiceal cancer in 2007, Stuart battled this rare disease with an unimaginable tenacity and vigor. Countless surgeries, enervating chemotherapies, endless shuttling from home to hospital to office and back—Stuart continued defying fate, pushing himself through exercises and workout routines that kept him strong. He wanted to be there for his teenage daughters, Sydni and Taelor, not simply as their dad, but as an immutable example of determination and courage.

Every Day I Fight is a saga of love, an inspiration to us all.