November 14, 2016 by ConcertKatie No Comments

Kris Allen recently released a new Christmas album and has been doing some shows to help promote it.  Saturday he came to the Danbury Fair Mall in Danbury, CT.  The set was a mixture of Christmas and non Christmas songs since he was going to be playing for an hour and didn’t want to play only Christmas music the whole time.  He did a mix of songs off the new Christmas album as well as songs off of his previous albums.  He did a mashup of one of my favorites, “Monsters” with “Hit the Road Jack” which I had not heard him do before that was a lot of fun.  Two of the original Christmas songs that he performed I thought were hilarious and absolutely loved – Baby Won’t You Wait Until the New Year about having your boyfriend or girlfriend waiting until after Christmas to break up with you so the holidays won’t always remind you of the break up and Mommy, Is there More than Just One Santa Claus written from the perspective of a curious child who seems to see Santa everywhere during the holiday season and wonders if there must be more than one of him.  He forgot the words – on 2 of the verses – during Alright With Me which was pretty funny.  A few fans helped him out and got him back on track 🙂   Since this was at a mall, there was a video game store on the floor above where the show was happening and Mario (from Mario Bros.) was hanging out there and watching the soundcheck when I got there.  He mustve also watched part of the set because Kris asked if he was seeing things or if Mario was at his show lol

Kris played for about an hour, met up with VIP M&G winners (which somehow I didn’t manage to win!) and then he came back to sign for the non VIP winners.  It was so nice to see him again! (Especially so close to home!) 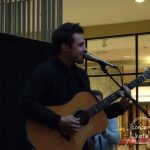 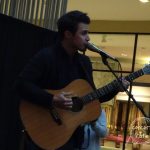 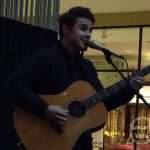 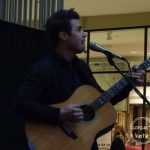 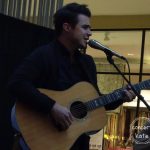 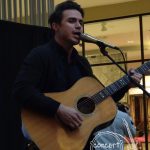 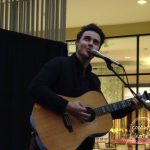 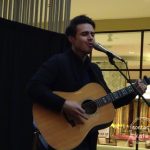 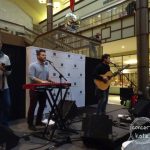 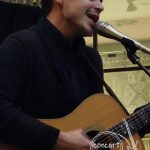 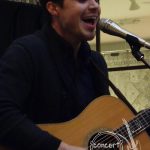 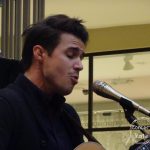