Maroon 5 at the XL Center

September 21, 2016 by ConcertKatie No Comments

Well… this post was supposed to be for my review of seeing Maroon 5 in Hartford, CT on the 19th.  A show that I bought tickets for in November of 2015! We were laughing because we knew what we’d be doing 10 months from then! Little did we know that Adam’s wife would get pregnant and her due date would be the day AFTER our show.  Little did we know that they would reschedule several dates for March 2017… and little did we know that ours would NOT be on that list but instead be CANCELED later.  No reschedule, just refunds! So this was supposed to be my review of the concert… but instead there was no concert to review and I am stalking my credit card balance waiting for the refund to go through and beginning to become convinced that using my AmEx for presale tickets is a curse. 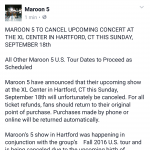 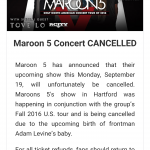