September 30, 2016 by ConcertKatie No Comments 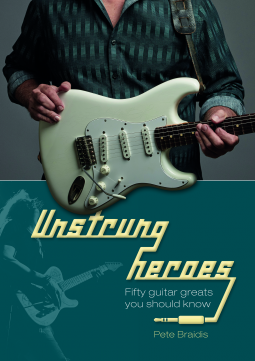 Unstrung Heroes is about some of the lesser known guitar players that you still should know. The first thing I did was go through the table of contents to see if there was any that I had seen live, and as far as I could tell, I hadn’t.  They aren’t ranked as a Top 50 but instead just listed in alphabetical order.  There’s a few pages of information on each guitarist and then an interview with them done by the author which was pretty neat and he asked a few silly questions as well which I liked.  I also learned there are two Randy Jackson’s as the one included in this book is NOT the one from American Idol :P.  I liked that this book went beyond the obvious greats like Clapton, Hendrix, etc. The author said that he found these guitarist to be just as good as the greats, but underrated.

About the Book
There may be plenty of books on guitar players, but there are very few, if any, that delve into the guitar players who have been somewhat “under the radar” through the years. This book gives exposure and long-overdue attention to 50 players who have certainly received some accolades in their careers but yet still remain outside of the mainstream and the typical lists of “guitar greats.” Interviews give insight into guitar players from various genres—including hard rockers Rik Emmett, Dave Meniketti, and Pat Travers, heavy metalists Andy LaRocque and Uli Jon Roth, funk masters Michael Hampton and Howard E. Scott, jazz-fusion players Frank Gambale and Carl Verheyen, prog-rockers Steve Hackett and Martin Barre, and singer-songwriters Bruce Cockburn and Richie Furay. The musicians get personal, speaking about their careers in their own words. Also included are short biographies on each player and photographs.