September 2, 2016 by ConcertKatie No Comments 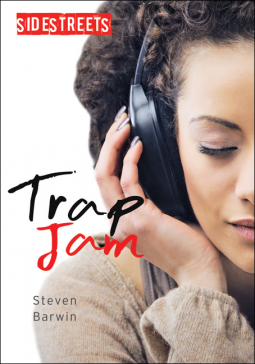 Trap Jam was a pretty easy read.  It is under 200 pages and from what I am seeing on GoodReads seems to be geared towards the more casual reader than one who reads all the time.  Since the book is so short, the story line moves pretty quickly which I liked. But unfortunately that left little time to expand on the characters and I would have liked to know more about them and their backgrounds.

The book is about Olivia – she is 16 and in high school but has dreams of being a drummer.  She auditions for a band that friends Eddie and Lucas are in.  She lets them believe that she is in college and 19 years old, even goes as far to get a fake ID.  She drunks with the band and has started sneaking drinks at home too (even though she knows that her Dad has the liquor bottles marked with how much is in each of them).

Lucas ends up falling for Olivia – hard.  She has been helping her friend Raymond get in to school and when he shows up to let her know that he got in – Lucas loses it and beats Raymond unconscious.  He convinces Olivia that it is her fault and she will get in trouble too and after Raymond’s brother shows up at his dorm room looking for him, he takes Olivia and they run off in his roommates van.  Lucas is stealing, drinking and wanting to have sex and Olivia knows that she needs to get out, but isn’t sure how.  She tells him that she lied and that she is 16 but Lucas doesn’t care – he loves her either way.

Slowly Olivia begins to realize that everything Lucas has been telling her are lies and that he is dangerous.  She tries to get away… but can she before it’s too late?

Drinking. Lying. It’s all for the music.

Olivia is living a double life — high-school student by day, drummer by night. Olivia doesn’t know when hanging out in clubs and drinking to appear older and enjoy the music scene became a habit, but she finds herself hungover at school and sneaking alcohol at home. Her bandmates Eddie and Lucas think she is older, and Olivia keeps up the pretence even as her real life starts to fall apart.

When Lucas catches Olivia talking to her friend Raymond in the women’s washroom, he beats up Raymond in a jealous rage. With Raymond unconscious and seriously hurt, Lucas tells Olivia that Raymond’s criminal brother is looking for them for payback. They go on the run, sleeping in a borrowed van and stealing to get by. Lucas keeps Olivia drunk and off-balance, telling her he loves her and pressuring her to have sex with him — even when she reveals she’s only sixteen. Still, through an alcoholic haze, Olivia sees that Lucas is delusional and dangerous. When she finally discovers that the story about Raymond’s brother is a lie, she realizes she has to get out of Lucas’s obsessional trap.