September 1, 2016 by ConcertKatie No Comments 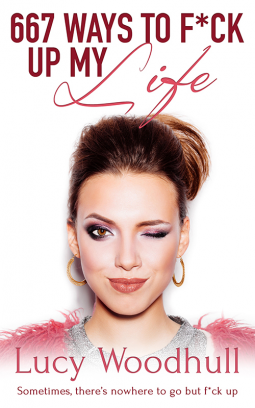 This book was absolutely fantastic.  In the first chapter, we meet Dagmar Kostopoulos.  She is getting fired from her job for not sleeping with the boss in order to get ahead.  When she gets home, her boyfriend tells her that he got a job in LA.  She’s pretty pumped that now she has no ties in NYC and can go with him – except that he has no intentions of taking her with him or trying to long distance thing, she’s been dumped.  Her boyfriend has told her terrible things about herself and how she is boring and will never find anyone else, etc.  Dag decides to do a total 180 and makes a list (and a blog) about how she is just going to be a total F*ck up now.  No more by the book, responsible and honest Dag.  She applies for a job at a coffee shop and tries to sleep with the manager.  She goes to a bar and creates a complete alter ego for herself – Giselle, a flight attendant. She is no longer Dag that used to work editing books. (Although I love how she corrects the people around her’s grammar from time to time!)

And this is when Dag ends up getting in trouble… and things get interesting.

She ends up meeting a really sexy writer at the bar. She intends to just take him home, have sex with him, and that will be that.  Except he has decided that he doesn’t want to have sex with her without having a proper date yet so the lie continues… and continues.. and continues.  Dag’s best friend Mel keeps telling Dag that she HAS to tell the truth because if it comes out any other way, things will not be good.

Well, this is a book and a dramatic one at that so what do you think happens… her blog identity is revealed, sexy writer guy finds out from someone other than Dag… and blocks her from contacting him.

Can she get him back? Is her life ruined – again?  What will happen with the blog? Will she get a book deal? TV deal? Movie deal? and what other ways can Dag and Mel f*ck everything up?  Find out in the hilarious and fun 667 ways to F*ck up my life!

Sometimes, there’s nowhere to go but f*ck up…

Twenty-something Dag has always been the ‘perfect’ woman. Responsible, honest to a fault, hard-working. Even her bras are no-nonsense. And for what? Her boyfriend dumps her for being boring, and her boss fires her for not sucking on his nether regions to get promoted. What’s a perfectionist overachiever to do? A complete one-eighty.

To heck with rules—Dag orchestrates a spectacular fall from grace by ruining her life exactly six-hundred-sixty-six times, and finally has a little naughty fun. Some scandalous Spandex and a few bar lies later, tame little Dagmar becomes Giselle, ballsy siren.

The wild thing is…it works! Dag gets a better job and meets the sexiest man she’s ever known. Well, Giselle meets him. Dagmar doesn’t exist. Except that she does, and her escapades just became a ticking time bomb, one that might blow her heart to smithereens.

Join Dag for her irresistible and hilarious fuck-ups, because every good girl needs to inject a little bad girl sizzle into her veins.