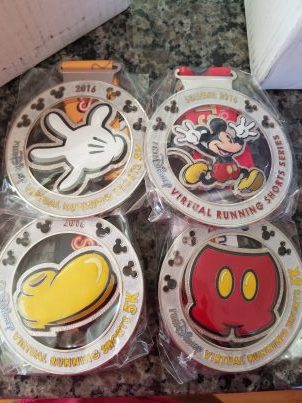 This is the first time that RunDisney did a virtual race. Usually they do races at their parks.  Due to their restrictions, I’m not sure I’d ever be able to do a race at the park, so this was great since I was feeling left out.  These races were a bit more expensive than your average virtual race, but isn’t everything Disney?  If you bought all 3 together you got a bonus 4th medal and a tumbler.  There was a bit of controversy over the charity as well as Disney would only be making a gift to the charity and not giving a certain % of the registration fees to the charity. Runners could also donate more if they wished at sign up. The medals took FOREVER to show up – the races were supposed to be done in May-June and I just got my medals last week. They are GIGANTIC though!