July 1, 2016 by ConcertKatie No Comments 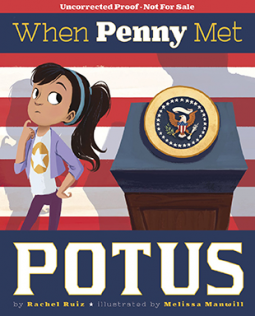 Penny wakes up early, even though she doesn’t have school.  She is excited to go to work with her mom – her mom works for POTUS!  It becomes clear that Penny doesn’t know what POTUS stands for, so she imagines a monster with its own secret service team.  When her Mom is busy making phone calls, Penny sneaks off to try and find POTUS herself.  Everyone she asks says that they have not seen POTUS lately, until she bumps into [ SPOILER DONT KEEP READING IF YOUD LIKE THE END OF THIS BOOK TO BE A SURPRISE] a woman.  Penny is surprised to find out that she is POTUS and that POTUS stands for President of the United States! The two enjoy some ice cream.  Penny had a great day.

This is a really cute book and the POTUS that Penny imagines is super cute!

From debut author Rachel Ruiz, When Penny Met POTUS is a unique and clever picture book about a young girl whose mother works for the president of the United States. Penny has heard the term POTUS over and over but doesn’t know what it means—and her imagination runs wild! When she spends a day at the office with her mother, she asks a few questions, looks around, and tries to discover just who—or what— POTUS is.
For ages 4-7.
About the Author: After working for President Barack Obama on his re-election campaign in 2012 (and fielding unending questions from her 3-year-old daughterabout POTUS), Rachel Ruiz was inspired to write her debut picture book. When Penny Met POTUS is an adventure in imagination and a perfect introduction into politics for any age! Rachel lives in Chicago with her husband and daughter.
About the Illustrator: Melissa Manwill has a passion for stories and for storytelling. She grew up climbing trees, digging holes, and chasing rabbits, and she puts all thatenergy into her artwork. Melissa received her BFA in illustration in 2014 from Bringham Young University and currently lives in California.