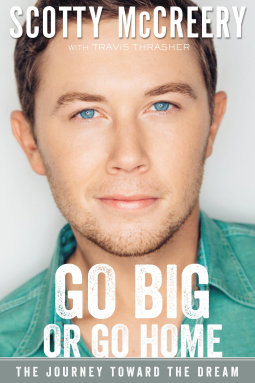 Season 10 is my favorite season of American Idol, so I was pretty excited when I saw that Scotty McCreery had written a book and that the publisher granted my wish to read and review it on NetGalley!

It was really cool to read about all the effort that went into Scotty eventually deciding to try out for Idol – how his Mom had forged his signature to sign him up for a local Idol competition (you’d think it would have been the other way around with the kid forging the parents signature!) and how he always used to sing Elvis on the bus to the kids on the way to school.  How his parents took him to Milwaukee to audition – and they didn’t even tell his sister that they went!

He recalls the reasoning behind choosing the songs that he did and talks a lot about how he still wanted to play baseball for his high school and even went back to finish his senior year after he won Idol. That was something I really admired about Scotty – not only did he go back to finish school (he said that he would never again have a graduation from high school with all his friends, but tours and everything else he could) he also went to college and scheduled his tours around that! He just seems like such a sweet, down to earth home town boy.

Scotty is also the national goodwill ambassador for the 12.14 foundation – which hit close to home for me since I am from CT and have a few connections to some of the people who lost their life that day in Newtown. I think he is a perfect fit even if he is not from CT.

It was just a simple singing competition that would be fun to audition for. Who knew what kind of doors it might open for a sixteen-year-old from Garner, North Carolina.

Go Big or Go Home is the story of a kid with country songs in his soul. The special thing with Scotty McCreery, however, is that he has this God-given ability to sing those tunes the exact way they should be sung. Daring to enter the limelight at such a young age, Scotty finds himself embraced by the nation, and even overseas, as he competes on “American Idol”. This is his journey from his North Carolina roots to winning America’s most popular singing competition and launching a musical career he had always dreamt about.

Go Big or Go Home narrates Scotty’s journey from a kid imitating Elvis on the school bus to 30 million across America tuning in to see him win Season 10 of “American Idol”. Now as he completes his ground-breaking fourth album, Scotty shares a glimpse of where he came from and the impact his faith, family and friends have had on a humbled guy who keeps asking “why me?”