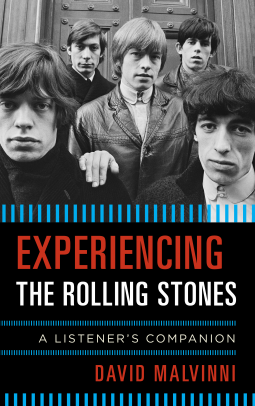 Experiencing The Rolling Stones is a listeners companion. The book opens with a timeline of the band and gives a background on the era when the albums were released. It also has the key tuning for the songs as well which I thought was pretty neat. It also talks about the styles of the songs.  Overall a pretty cool read and probably a lot more interesting for those who are a fan of the band.

Experiencing the Rolling Stones: A Listener’s Companion looks at the Stones’ music from the inside out. Throughout Malvinni places individual songs and entire albums within the transformative era of the ‘60s, focusing on how The Rolling Stones integrated African-American R &B, blues, and rock and roll into a uniquely British style. Vignettes attempt to describe what it was like to hear the Stones’ music at the time of its release thread their way through as Malvinni goes beyond the usual stories around their significant songs. Tracing the distinctive sound that run through their catalogue, from chord progressions and open guitar tunings, to polyrhythmic Afro-Caribbean beats, to their timbral innovations using non-traditional instruments, he shows how the Stones retain their identity through the decades.

David Malvinni, musicologist and classical guitarist, is adjunct professor of music and African American studies at Santa Barbara City College and author of The Gypsy Caravan: From Real Roma to Imaginary Gypsies in Western Music and Film, and Grateful Dead and the Art of Rock Improvisation