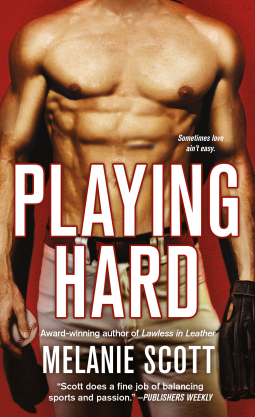 Playing Hard is a baseball romance, which I usually love.  For some reason I couldn’t get started on this one right away, it took several tries.  I think it as more trying to fit it into my schedule than anything else.  When the galley expired, I had to be quick to finish it before the version on my app expired and I’d lost it forever.

I was glad that I stuck it out and did end up finishing it, as I really enjoyed it! I even was yelling at one or two of the main characters near the end, that’s how you know I was really into it.

The book is about Amelia, an economist living in New York City working on Wall St.  Her “brother”, Finn, has been sent to the New York Saints a major league ball club. He invites Amelia, or Milly, to a party that is being thrown by the team.  When there, Amelia meets Oliver, the Saints first baseman.  Finn thinks that Oliver is a player, but he seems to be interested in Amelia.  Finn ends up pissing Amelia off so she leaves the party and a few people ask Oliver to bring Finn home since he has had too much to drink and they worry if they put him in a cab he will tell the driver to take him to another club.  While heading home they get in a car accident that leaves Ollie pretty beat up.

Amelia feels bad for Oliver and goes to see him in the hospital and brings him some gummy bears. The two end up starting a relationship that Amelia wants to try and keep secret from Finn and his family (her second family).  Finn ends up taking Oliver’s first baseman position for the play offs so there is a bit of tension between the two.

Amelia ends up getting an opportunity at work to go to Hong Kong for 6 months, which is her dream.  She always wanted to work at a different office and then take some time to travel.  Having only been with Oliver for about three weeks she doesn’t want to stay behind just for him but she isn’t sure how to tell him or what she for sure wants to do.  Of course, Finn’s sister and Amelia’s best friend Em, decides to get pissed off at Amelia and spill the beans to Oliver.

Oliver and Amelia break up – and of course I am yelling at them to just try and work things out! And hopefully, in the end, they will.  Or will they? You’ll have to read the book to find out 😉

My biggest pet peeve about this book is when baseball books have partially real teams and partially fake teams. I prefer it to either be all one or all of the other.  The New York (or Staten Island?) Saints are playing against the Red Sox in the playoffs and the winners will play the Yankees.  So now there are 3 N teams, since my Mets are mentioned as well.  Doesn’t make sense. I’m sure there’s a reason for it, but as a baseball fan reading these books it always makes me a bit nuts.

Ignoring that though, I really did love this book!

HIS GAME NEVER FAILS…
Baseball star Oliver Shields has always lived for the game-and now the New York Saints have finally made the play offs. The season isn’t over yet, but meeting gorgeous Amelia Graham seems like a bonus grand slam-until one night of partying threatens to take Oliver out of the game for good…

UNTIL SHE puts his heart in play…
All work and no play has always been Amelia’s motto, earning her a coveted job on Wall Street and the freedom she’s always longed for. Oliver is a real player-in more ways than one-and a distraction she doesn’t need, especially when she’s trying to win a chance at her dream assignment at work . When flirtation turns to attraction so fierce neither one of them can say good-bye, will Oliver and Amelia step up to the plate-and give love a chance?