February 26, 2016 by ConcertKatie No Comments 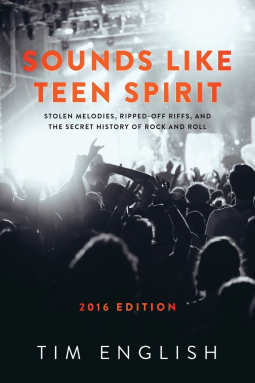 Sounds Like Teen Spirit is a book made up of Stolen Melodies, Ripped-Off Riffs and the Secret History of Rock and Roll.  This is the updated version for 2016. There is new music, old music and even entire sections devoted to Led Zeppelin, The Rolling Stones, Bob Dylan, Bruce Springsteen and Rod Stewart!  This book examines songs that sound like songs that came before them.  While Robin Thicke’s Blurred Lines was a hot topic more recently, this type of thing has been going on pretty much since the dawn of music. The author notes that this book is meant to be an interactive experience and suggests that you listen to the tracks presented to see the similarities for yourself.  This was how I had intended to go through the book as a lot of times I don’t hear the similarities in songs until they are pointed out to me. (Stay With Me / I Won’t Back Down I never heard initially which my brother found to be ridiculous because he picked up on it right away.)

The first part of the book, new music, has a case of “Katie isn’t paying enough attention at all” in mentioning that Rixton’s “Me and My Broken Heart” sounds like Rob Thomas’s “Lonely No More”, to the point that they gave Rob songwriting credits on the track.

Most of the tracks throughout the book I either am familiar with one or the other mentioned, but rarely both.  Thankfully, most of these were available on YouTube for me to give a listen to see what I thought. It was fun how some of the songs within a couple seconds I could hear the similarities and others it took listening to the entire song sometimes more than once before I caught the similar melodies.

Definitely one of the more interesting music related books that I have read as of late! Worth checking out!

This 2016 edition of Sounds Like Teen Spirit provides hundreds of pairings of songs that appear to have “borrowed” their melodies from earlier songs. Readers will discover the music that influnced the songs of the Beatles, Led Zeppelin, Bob Dylan, the Rolling Stones, Bruce Springsteen and many more.

Sounds Like Teen Spirit covers recent plagirism cases involveing Robin Thicke, Sam Smith and Coldplay as well as famous cases such as when George Harrison was sued over his song “My Sweet Lord” by the publishers of the Chiffons’ “He’s So Fine”

Readers will never hear the familiar songs in quite the same way after reading Sounds Like Teen Spirit. For example, the Doors’ “Hello I Love You” has the same melody and the Kinks’ “All Day and All Night,” and the riff that powered Nirvana’s “Smells Like Teen Spirit” is a variation on the guitar riff from Boston’s “More than a Feeling.”

Sounds Like Teen Spirit explains that creative artists are influenced by a wide and often surprising range of sources. For instance, John Lennon’s song “Imagine” may have have been influenced by a novelty song that his father recorded to cash in on his son’s fame, and Bob Marley’s “Buffalo Soldier” contains the melody from “The Banana Splits Theme!”