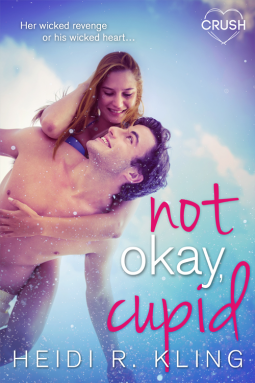 Not Okay Cupid is about Hazel and Felix. Although, not at first.  Hazel and Jay have been high school sweethearts forever, they are going to go to colleges near by each other to easy transition their high school romance into a college romance and after that they’ll get married and start a family! It’s perfect!  That is until at lunch time Hazel sees Jay flirting with… HER BEST FRIEND!?

Enter Felix, Hazel’s best friend’s brother.  The two hatch up a revenge plan that has Hazel fake-dating Felix in order to make Jay and Kimmy jealous.  But it seems that Felix has actually had feelings for Hazel since they were kids!  Does Hazel feel the same about him or is she convinced he is a Man-Beep?

This book alternated chapters between Hazel’s perspective and Felix’s, so throughout you could tell that each were beginning to like each other for real, but weren’t saying anything to each other in order to finish up their revenge plan.  But throughout the whole book I found myself wanting to scream at them “JUST TALK TO EACH OTHER! TELL EACH OTHER HOW YOU REALLY FEEL!” which made it a bit frustrating to read through at times.  I can’t tell you how it ends and if I am happy with what happened or not… you’ll just have to read it yourself to figure that out.

This was a quick read and the events in the book only spanned about a weeks worth of time – though it seemed to be a lot longer than that.  It started with Hazel getting excited for the Valentine’s Day dance… and then realizing she no longer had a date, or did she? And it ends just after the dance.  But I guess a week when you’re in high school dealing with all sorts of love drama – it can seem like it’s a lot longer than a week!

Her wicked revenge, or his wicked heart…

Felix James loves his life. Casual relationships. Loads of surfing. He’s as drama-free as they come. But he can’t stand by when his sister steals her best friend’s boyfriend, and the dude insists it was Hazel’s fault. So Felix vows to help turn Hazel into a girl her ex can’t resist—so then she can break his heart.

With an alliance in place, Hazel’s revenge is all but assured. But with each piece of payback, she feels a stronger attraction to Felix, even though revenge will turn her into a girl Felix could never be with. And soon Hazel has to make an impossible choice: revenge…or Felix, the boy who’s stolen her heart.

WARNING! This book contains betrayal, revenge, and that most tempting vice of all, the bad boy you know you can’t have.