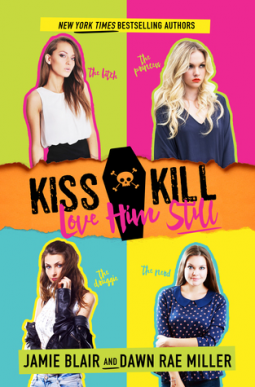 Kiss Kill Love Him Still is a mystery novel, which I certainly like to throw in the mix here and there.  Online reviews said it was similar to Pretty Little Liars, Gossip Girl, etc which are a few of my favorite TV shows so I figured it would be an enjoyable read for me.  The story is told from the perspective of 4 girls – all of whom were having some sort of a relationship with Jackson Landis who has wound up dead and no one is sure why.  Since Jackson knew secrets from all 4 of the girls – any of them could be a suspect and they aren’t sure if he took their secrets to the grave with him or not.  There is Val – who is dating Jackson’s roommate Paul, is always drunk and once had a threesome with Jackson and his girlfriend – which was recorded and Jackson has been blackmailing her over the video.  There is Livie who is Jackson’s girlfriend and also a kleptomaniac and once again Jackson has some videos of her stealing.  There’s Haddie – the chubby girl from the library who wears a purity ring but wrote papers for guys in exchange for sex. And finally, Reggie, the campus drug dealer who gives Jackson drugs for free and then they have sex.  All 4 of them are trying to piece together what happened with 2 of them pretty sure it was not them who did it and 2 of them not really sure what might have happened that night.

The book was a pretty quick read and I got into it, despite pretty much hating all the characters in the book.  Only one problem – this is the first in a series so the end of the book has a theory as to who might have done it – but the book doesn’t end so there is no closure!  The next book won’t be out until Spring and I bet that whatever theory they had working near the end of this book will be thrown out the window in the beginning of the next… (especially if it takes the Pretty Little Liars route – the books could go on forever!)

I did enjoy the book enough and the crazy characters to give the next book a try in Spring.

I received an e-copy of this book through Kindle Unlimited (despite requesting it through NetGalley where it expired on me and Tomoson where I was never sent a copy – I wanted to read it that badly) in order to write this review. I was not otherwise compensated.

Jackson Landis kept secrets. It’s how he got girls into bed, the grades he wanted, and a reputation for being the life of the party.

But now he’s dead, and no one knows how or why. Especially not the four girls whose secrets he protected. Secrets so scandalous they could cause each girl to lose something valuable. Secrets so dark, someone may have killed for them.

The four girls – a campus drug dealer, an overweight bookworm, a closeted lesbian, and a spoiled princess have one thing in common – they’re terrified the things Jackson knew may not have died with him. As Reggie, Haddie, Val, and Livie try to piece together her own role in Jackson’s death, each girl realizes Jackson had some not-so-pretty skeletons of his own.