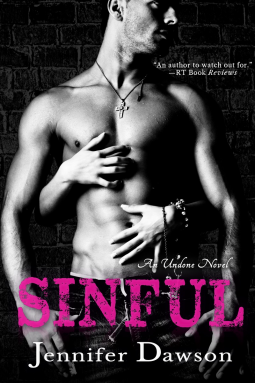 Sinful is about Jillian and Leo.  Jillian has had a crush on Leo for YEARS but he is her brother’s best friend and so they have kind of tried to keep away from each other for that reason.  But Jillian decides she has had enough. She is going to tell him that she wants him and if he is not interested she is done and is going to move on.  Leo tries to put up a front that he is not interested, but when she starts playing games by hanging out with one of his friends to get his attention – it works.  At first Leo is nervous because Jillian does not know who he really is, but once she finds out will she leave?  He ends up starting a submissive relationship with her and even takes her to his Nana’s birthday party.  His family already knows who she is and all seem thrilled that Leo has finally come to his senses.  But then he ends up having a freak out and walking away.  Jillian wants him back but had told him if he walks away that was it, she is done.  Will they work things out when everyone seems to think that they are perfect together but Leo? Can Jillian convince him and help him get over the trouble he is having with their relationship?

I really liked this book.  I read it over 3 sittings, but it was hard to put it down. (But I had to. You know, sleep.)  I really liked the characters of Jillian and Leo and how they seemed to bring the best out in each other, even if they didn’t always see it at first.  Though a bit of an emotional roller coaster at times, I really enjoyed reading it and these characters and finding out if they had a happily ever after or not!

I’ve wanted my brother’s best friend, Leo Santoro, for too many years to count.
No matter what I do, he won’t confront the attraction that burns between us.
It’s time to put him behind me once and for all.
I have no choice but to call his bluff.
And then I will walk away.

The last woman I should want is my best friend’s baby sister, Jillian Banks.
No matter what I do, she won’t ignore the attraction that burns between us.
It’s time she learns the real me.
The only promise I can make is that her fantasies are no match for reality.
And then I’ll watch her walk away.