November 18, 2015 by ConcertKatie No Comments

Sunday night Jon McLaughlin returned to StageOne in Fairfield, CT for his 3rd visit.  He seems to come every 2 years which is not quite enough. He did mention about how much he liked the venue once again, so maybe they can figure out a way to get him to come more often!

Before the show I had purchased a VIP pre-show ticket from Jon’s website.  That got me in to the show early to hear Jon perform 2 songs and get pics with Jon and an autograph before the show. Oh and a really cool lanyard. (That I spent half the ride there trying to figure out how I would put it in my scrapbook)

There was a small group of us in VIP and Jon came out with and guitar and his guitarist (whose name escapes me) and said that the guitarist will be playing everything Jon was playing, just louder.  First he did Beating My Heart.  He talked a bit about how we were the 19th or so show on the tour and it really doesn’t start to get good until the 18th or so because they finally work everything out, but that his voice was starting to go.  He said he wasn’t drinking tea, but instead just scalding hot water.  Next up he did my favorite song, Beautiful Disaster.  He mentioned that neither of the songs he did at VIP would be done during the set at the show and we were VIP and superior because we got to hear them while everyone else would just be wishing they did.

He took pics and chatted with everyone and then it was time to wait for the show to start!

Tess Henley kicked off the show – Jon had said that we wouldn’t want to miss her and he was right! Tess also was a piano player and recently got to record an EP with Don Was – who also worked with John Mayer (who is from Fairfield, where this venue is)  Tess had a 40 minute set that I enjoyed.

Jon played roughly a 90 minute set, with the majority coming from his latest release, Like Us.  He said he promised that we would play it well, but thought it might be a boring show for those who didn’t have the album (but they are available at the merch table!)   Before Don’t Mess With My Girl he said that this song is really the most descriptive of his personality if you know him in real life – he is very aggressive.  Of course the crowd couldn’t help but laugh.  He said he shot a music video for the song and it should be coming out soon.  He then went into a cover of I Can’t Feel My Face… which I tried to record, but fell victim to the security flashlight in the face.  I had the camera on my lap too but apparently that was more of a problem then the cell phones up in front of people’s faces recording. He said that he thought that was the song that all the kids are listening to and when he heard it on the radio he really liked it.

He then went into a story about it being cold in Nashville where he lives (but not as cold as up here, but too cold for his little daughter Luca to go outside and not die instantly from it being too cold for her) and how he would play a riff on the ukelele for her and she would dance.  Until one day she stopped, turned to him and said “Stop playing that song. Play a new song”  He tried to explain to her that his instrument is piano and he doesn’t even really know how to play the ukelele but she didn’t understand so he ended up writing a song on the guitar.  He also mentioned how he liked when other bands did a breakdown of their set and kind of unplugged, but that his “piano” was fake and if he unplugged it no sound would come out.  So he now had this song, that he felt he had to be put on the album, but “buried” it as track 6 that he could do as a breakdown song in his set. And went on to do “Thank God”.

Before Merry Merry Christmas Everyone he said he was going to get a bit controversial and do a Christmas song and if someone needed to walk out of the room because it may have been too early for Christmas songs, he was ok with that – but he has a Christmas EP he is trying to sell!  He had Tess Henley come out and join him for a duet of Merry Merry Christmas Everyone (which they first tried at a different show – rehearsing for Fairfield, of course). During the encore he also did Jingle Bells but promised that 2 was his limit.

For the encore he let everyone yell out songs since there was no real setlist and everyone yelled out something different. He teased that there were not 2 people who wanted the same song and ended up playing Indiana. A few people cheered and he was glad 6 of us would be looking forward to it.

He ended the show by talking about how he wanted to do something to help human trafficking for years and finally with this tour he is doing something. He has partnered up with World Vision who will be building safe houses in Bangladesh to help keep children from being sold.  He mentioned how Bangladesh is roughly the same size of New York State but they have 19 million people in New York and Bangladesh had I think he said 115million people.  So World Vision is going to build these safe houses – and he thought they would be really expensive – like $100,000 to build one.  But then he found out that they only cost $2,000 to build.  So all the profits from the sale of his new album on CD or vinyl (at shows, I am not sure if through his website as well) are going to World Vision to help build these safe houses and they already raised enough to build a few but want to build more.

Jon put on another great show, as was expected. He mentioned that he loves the venue and loves that we come to see him (and that we are all rich in Connecticut. Ha!) and buy tickets (and merch!) and hopes to come back soon. I just hope it’s not another 2 years before he comes back! 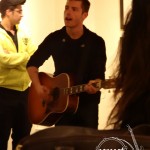 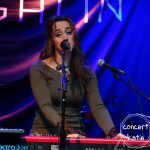 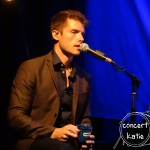 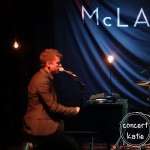 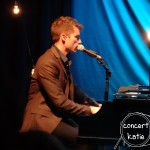 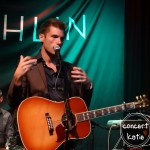 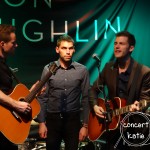