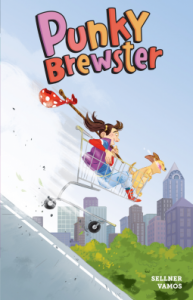 Punky Brewster was one of my favorite shows when I was a kid. I definitely wanted to be Punky.  So when I saw there was a comic book I had to check it out, even though I try to avoid reading comics.

The story has been updated for the modern day, so they have cell phones and other stuff that didn’t exist when the show was originally on.  And there seemed to be one major plot change – I remember Henry as having no relation to Punky, but owning the building she was squatting in.  Now, it’s been a while so I might not remember exactly but in the comics, Henry is a long lost cousin of Punky’s Mom so therefore the next of kin for Punky.

Otherwise all the characters are the same as I remember them from the show – with just some modern additions. Overall it was a cute set of comics and I may have to check out future volumes because I loved Punky!

The beloved TV series returns in this heartwarming, lushly illustrated story of a brand new family made from persistence, pluck, and Punky Power!

Punky Brewster, a bright eight-year-old girl, has been abandoned by her mother and lives on the streets of Chicago with her puppy sidekick Brandon. Punky thinks she doesn’t need help, but after getting picked up by the police she enters a foster home and starts to search for a family. Punky meets Henry, a long-lost relative, and decides he’s the adoptive dad for her. All she has to do is convince the foster home, adoption judges and lawyers, and possibly Henry himself. Luckily, she’s got an unbeatable resource — her limitless reserve of Punky Power!