October 16, 2015 by ConcertKatie No Comments 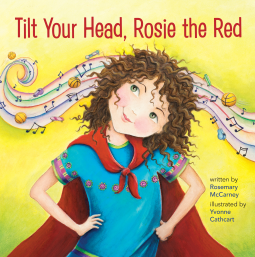 Rosie likes to wear a red cape everywhere.  She hangs it on her bedpost at night and puts it back on as soon as she wakes up in the morning.  Her Mom tells her that she won’t be able to wear it at school, so Rosie says she will just wear it TO school and take it off once she gets there.  She likes to listen for all the sounds on her way to school, bikes and crossing guards whistles.  But when she gets to school she hears laughing that she doesn’t like.  Her classmates of Fadimata, another girl at school, surrounded on the swings because she wears a hijab. Rosie takes Fadimata’s hand and they walk in to class where she tells the teacher what happens.  Then Rosie tilts her head and has an idea – she will wear her cape as a hijab!   When she gets to school the next day, there is once again a circle of kids around the swing.  But when she gets closer she realizes that all of the girls are wearing scarves on their heads.  If you look at things in a new way, with a tilt of the head, anything is possible!

Arriving at school, Rosie is dismayed to see the kids on the playground taunting her classmate Fadimata, who is Muslim and wears a headscarf. Rosie comes up with a plan. Rosie has a red cape she likes to wear, so she asks Fadimata if she would turn the cape into a headscarf for her. The other kids in their class don’t want to be left out, so they ask Fadimata to make them headscarves as well. The experience confirms Rosie’s belief that if you tilt your head and look at things differently, you can see the world through someone else’s eyes.