My visit to the Meredith Vieira Show

September 22, 2015 by ConcertKatie No Comments

There are two items that are legitimately on my bucket list (along with a few others, but if you’ve been reading this site for a while you know I like to add things sometimes once they’ve happened just to cross them off) and those are: Meet every NSYNC member (1 down, 5 to go) and See every NYC TV show live. (I don’t have a count for this since the shows are always swapping out, but I know I’ve been to about a dozen.)

So when Lance Bass announced he was going to be moving to NYC to be on the panel of the Meredith Vieira show, Christine and I immediately decided we’d try for tickets.  She is a teacher, so she had last Monday off.  I took the day off, we boarded an early train to the city and hoped for the best.

We were told lines would begin forming at 8:15 but were already formed when we got there. They don’t let you get in line until your entire party is present – even if one member is just slower getting to the line and on her way!  It wasn’t too long before they started checking us in and giving us different colored passes and wristbands.  When we got to the check in desk the girl said “this is the last one” and we had to wait but they came back with 2 passes for us.  Then we heard the people behind us getting told that if the VIP people didn’t show up, they’d be able to take their spots.  PHEW! We *just* made it.  (I think the rest of the line did also end up making it in too.)

We then spent some time in the Peacock Lounge which is a top secret room that you’re not supposed to take any pictures of. You also can’t take any pictures in the hallway when waiting to go inside.  You’re not missing much. The walls just say “The Meredith Vieira show” on screens. In the Lounge there were photo monitors that rotated out pictures of Meredith and her guests from last season.

Then it was time to go to the studio! We took a secret elevator to a secret floor and then walked in the studio and were told to go to the left. We went down a bunch of stairs and were sat right in the front row.  This was great, because we were the closest to Lance as possible as an audience member, but also not so great because the cameras were right in front of us so I had trouble seeing Lance most of the show 🙁

Lance had on an… interesting… outfit for the show, something he wanted to wear for one of the fashion week parties but didn’t.  He was out the first half of the show with the panel.  They had the camera on us, we thought for some Lance reaction shots, but they didn’t end up showing any shots in the show.  Bummer.  Being in the front row also meant we weren’t on TV much either.

Christine was also asked what she would do to meet Lance Bass.  Would she sing an NSYNC song?  I mean… cmon we do that all the time for no reason whatsoever… so she sang some of Bye Bye Bye to the whole audience (with Lance on stage.) Did she/we get to meet him? NO! Don’t tease us like that, warmup lady.  She also gives out candy throughout the breaks and I got 2 pieces for yelling out JOEY FATONE. (again, something I do all the time for no reason whatsoever… it was nice to be rewarded for it) and I also got pelted with starbursts because I couldn’t name any Richard Gere movies.

Oh yes, Richard Gere.  In addition to seeing the September 14th guests (Fashion Police – Melissa said “go eff yourself” not censored which led to the show being censored and one of the soldiers who stopped the terrorist attack on the train in Paris) We had an additional segment to be in the audience for.  One the one hand, this was neat to see more… on the other, I bet we could have ran into Lance if we left when the actual show ended. (Fan Girl Problems)  Richard also took a photo with the audience but I have no idea where it ended up.  If you see it somewhere, let me know!

And I almost forgot! Before the last segment, Meredith came by and shook my hand and the girl’s next to me. She asked what I did to my leg so I told her I had CP.  She looked like she was going to come talk to me, but then got called away into the audience to talk to Perez Hilton.  ugh.

Overall a fun day but if you want to actually see the show, don’t agree to sit in the front row when they offer it to you! 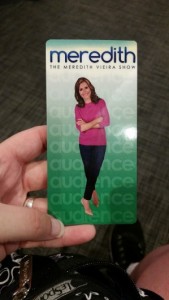