September 11, 2015 by ConcertKatie No Comments 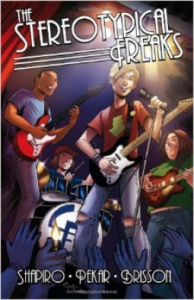 The Stereotypical Freaks starts out as just Dan and Tom, who play guitar in Tom’s basement. When Tom sees a guy ask out his crush of six years and then enter the battle of the bands that Dan has been bugging him about entering, Tom impulsively signs them up and then they need to look for 2 more band members.

They end up adding Mark, Tom’s childhood best friend that drifted once he started playing football and Jacoby, an exchange student who is a great drummer.

I don’t want to give too much away, but I thought that this was going to be just another book (comic book) about high school kids starting a band and winning the battle of the bands. Boy was I wrong, it was so much more than that and a very emotional journey.

I liked that before each chapter there were a couple of songs recommended for you to listen to. It ends up being a pretty nice playlist!

Four disparate high school seniors come together to compete in their school’s battle of the bands. Sharing a love for playing rock and roll, the members name the band “The Stereotypical Freaks” because they feel stereotyped by their classmates – smart kid, geek, star athlete and quiet weirdo… when in fact they know they are much more than those labels that have been placed on them. When one member reveals life altering news, winning the competition takes on more of a meaning to each member. Scared and angry, upset and yet still with a lot of resolve they set out to win one for the good guys… will they?