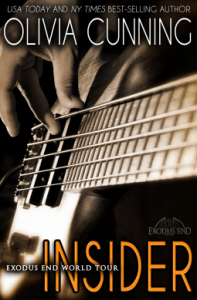 I LOVED THIS BOOK.  I don’t even know how to write this review because I loved everything about it.  At first I wasn’t sure if I’d finish it before it expired on me, because it is almost 500 pages.  But I gave it a go anyway and I am so glad that I did!  If you frequent the blog you know that I love, love, love rockstar romances.  I’ve read a lot. This one is probably one of my favorites.  I read a little bit before bed each night, and it was always so difficult to put the book down and go to sleep.  Had I started it on a weekend I probably would have done nothing else until I had read the book from front to back. It ended up taking me just about a week to get through and every night I couldn’t wait to get back to it.

I think it was because the main character, Toni, reminded me so much of myself – or maybe the life I want to have.  She is a writer and has been working from home mostly because she has been taking care of her nine year old sister while her Mom has been working. Toni’s Dad died when she was fifteen and her sister Birdie was born shortly after his death. But then she gets the opportunity to go on tour with a band, Exodus End, and get information on them for a book. But this book sounds super cool and it’ll be interactive with photos and video clips too.

Toni is a virgin and immediately after meeting the band, bassist Logan knows he has to be inside her. An hour later… and the deed is done.  But something happens with Logan. This isn’t like his other conquests. He seems to be really into Toni, even going so far as punching his other bandmates when they so much as hug Toni.

Slowly the band begins to trust Toni and information is revealed “off the record” in interviews.  But Toni has it recorded or documented in her journal and on her computer.  She promises that she will not print any of it… but when her Mom and editor (who wants to take the job out from underneath Toni) come to visit and her journ goes missing… everything ends up in the tabloids and Toni gets fired.  But Logan must know she would never do something like that, right?

After Toni is fired – where is her future with Logan? Did she actually sell the dirty little secrets of the band to the tabloids? I know but you won’t, unless you read Insider!!

I’m also super excited that this is the first in a series – the next one is coming out next year AND the author has 2 other bands she has written about as well so I am pretty excited to hopefully find the time to go back and catch up on those stories! (Once I make a dent in my other netgalley reviews, of course!) I’ll let you know all about them once I get around to checking them out!

Toni wants to be an insider.

Logan just wants inside her.

She’s finally ready to rock…
Toni Nichols set aside her dreams to raise her little sister, but now she’s reaching for the stars as the creator of a revolutionary interactive biography about Exodus End. She’s on tour with the rock band to immerse herself in their world, but how will she ever gain the trust of four veteran superstars who’ve been burned by the media before? Nobody said this was going to be easy. Then again, good things can come in hard packages.

Adrenaline junkie Logan Schmidt lives for the rush of playing his bass guitar before thousands of screaming fans. When he’s not performing onstage or in the bedroom, he’s looking for his next thrill in extreme sports. So why does a sweet, innocent journalist get his heart pumping and capture his full attention? Is Toni the real deal or just digging up dirt on his band? Logan’s eager to rock Toni’s world and roll her in the sack, but when she starts to get too close to his heart, she takes her insider look to a place he may never be willing to go.