September 25, 2015 by ConcertKatie No Comments 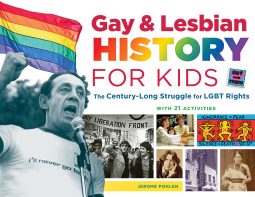 Gay and Lesbian History for Kids talks about the Century-Long struggle for LGBT rights.  Although this is something that is being talked about a lot recently, this book starts with a chapter “up to the 1900s”.  The timeline in the front of the book starts with 570 BC.  If you think that being gay was not a “thing” until recently – think again!  It even talks about the first sexual reassignment surgery – that happened in 1930!

In addition to all the great information on various gay and lesbian figures through history, there are also many activities throughout for kids to do based on some of the occupations of some of the people mentioned throughout the book. Writing poems, inventing secret languages, making up song parodies, etc.

While this book is geared towards kids, it had a lot of information in it that I didn’t know about – like one of our President’s may have been gay!  It is very informative for kids and adults alike and I think this is very important topic to be sharing with kids so that they can be more accepting of those who are LGBT as well as knowing that it is ok to be LGBT and a lot of really awesome people were too!

Part of the popular For Kids series, this book puts the historic struggle for LGBT equality into perspective

Given today’s news, it would be easy to get the impression that the campaign for LGBT equality is a recent development, but it is only the final act in a struggle that started more than a century ago. This timely resource helps put recent events into context for kids ages nine and up. After a brief history up to 1900, each chapter discusses an era in the struggle for LGBT civil rights from the 1920s to today. The history is told through personal stories and firsthand accounts of the movement’s key events like the 1950s “Lavender Scare,” the Stonewall Inn uprising, and the AIDS crisis. Readers will learn about civil rights mavericks, like Dr. Magnus Hirschfeld, founder of the first gay rights organization; Phyllis Lyon and Del Martin, who turned the Daughters of Bilitis from a lesbian social club into a powerhouse for LGBT freedom; and Harvey Milk, the first out candidate to win a seat on the San Francisco Board of Supervisors. Also chronicled are the historic contributions of famous LGBT individuals, and 21 activities enliven the history. Kids can write a free verse poem like Walt Whitman, learn the Madison line dance, design an AIDS quilt panel, and write a song parody to learn about the spirited ways in which the LGBT community has pushed for positive social change.