Lady A at Xfinity Theater

Saturday night Lady Antebellum brought their “Wheels Up” tour to the Xfinity Theater (aka The Meadows) in Hartford, CT.  I managed to find a non-$200 VIP ticket 2 rows behind the pit a couple weeks before the show so I decided I’d make it my August show since Hunter Hayes was opening and I love him and I was also very into Sam Hunt’s “Take Your Time” and he was opening as well.

Sam Hunt took the stage at 7pm and for a while I could see fine from sitting but then security didn’t seem to care about all the girls running into the row in front of me.  Apparently going in the pit without a wristband was bad, but going into the front row of the seats from wherever the hell you wanted? Totally ok.  Of course until Hunter Hayes was on stage then there was an usher going back and forth escorting the people who didn’t have a ticket for that row or my row out – which got really annoying with people walking by you back and forth back and forth – while an act was on stage!

Anyway – Sam did about a half an hour set in a Ninetendo controller hat.  By the end of his set you could see the sweat from his head on the hat.  It was about 95 degrees when I left my car to head inside and just the beginning of a heat wave.

Hunter Hayes took the stage at 7:45 pm and did an hour set, he did a couple of new songs – one that he released a couple week ago called “Saint or Sinner” and another one that he said was brand new that I didn’t catch the name of.  He went on to the stairs into the pit during one of the songs (Everybody’s got somebody but me, I think) and was asking the crowd if they knew the words. They must have told him a little bit because he said all he knew was a little bit of it too and he makes up new words every night and was surprised no one had noticed yet.  He also did a bit of shut up and dance with me and was running and jumping all around so he had to introduce the band and talk for a bit because he needed to catch his breath.  He has way too much energy! But I love it.

At 9:15 Lady A took the stage.  I sat down for a lot of their set because standing for all of Hunter tired me out, but luckily Charles is so tall I could see him almost the whole time I was sitting!  I’m not really a country fan (I know it’s becoming harder and harder to believe me when I say that) so I don’t know more than the songs that made it to top 40 radio, but they put on a really good show. (I totally forgot I had seen them once before at the Tim McGraw concert where we got SOAKED on the lawn and left before Tim!)  At one point they go to a stage in the back, and they all walked right by me. Unfortunately the aisle was really big and they went down towards the other side of seats so I wasn’t able to get any high fives as they went by.

I knew that Hunter was going to come out for Compass and had debated leaving after that because I didn’t want to get home too late. But I decided to stay and I was glad I would because as the last song of the regular set, they had Sam and Hunter come out and do Walk This Way and it was awesome!  I had peeked at the setlist a bit before the show (couldn’t find hunters though) and knew that the encore started with 747… so I was a bit surprised when they came out and did Need You Now. Then Charles said there was a bit of weather going on so that would be it for them.

We could see lightning going on over the lawn and when I got outside it was raining. Fortunately not pouring like the Tim show! And I was so hot it was nice to get rained on a bit on the walk to the car.  This was about 10:30. When I got to my car, there were 3 shirtless and possibly drunk guys parked next to me screaming the chorus of MMMBop. I assume they saw my “I Heart Hanson” sticker on the back of the car at some point during the night.  But now I kind of want that kind of entrance all the time!  I was hoping the traffic would be gone by 11, but the cars seemed to not be moving at all. I finally left the parking lot at about 11:30 and it took me almost until midnight to get to the highway, just up the street from the venue. I guess that’s what happens when you go to a show with 23,000 other people! 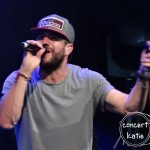 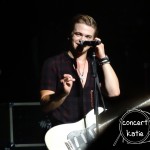 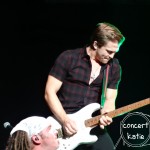 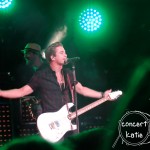 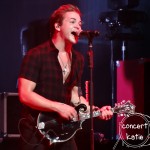 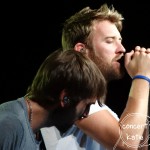 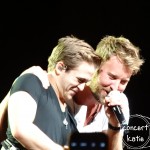 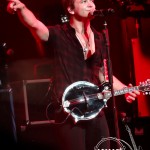 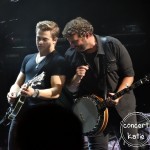 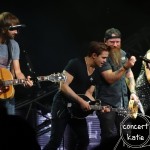 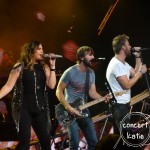 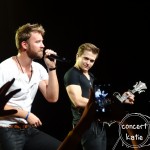 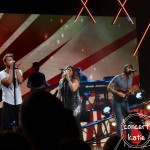 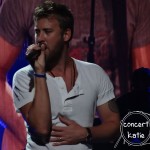 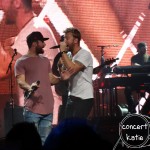 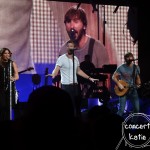