August 5, 2015 by ConcertKatie No Comments

Foxwoods does a lot of ticket giveaways via text and most of the time I enter any contest that I think might be fun to see.  My parents are Culture Club fans but their last time seeing them perform was before I was born. (And I’m old, so that was a while ago) When Foxwoods was giving away 2 front row tickets via text I knew I had to enter.  And I know what you’re all thinking “And you won, of course!”  Nope. I didn’t.  But they did email me a link for discounted tickets. When I first tried to get to the link it wasn’t working so I tweeted Foxwoods and they got it up and running for me. My parents and I decided to take advantage of the 50% off offer (and later some friends of the family did as well – and ended up in our row too!) and actually ended up scoring some decent seats for $42+fees instead of $85+fees!

The show was scheduled to start at 8pm so we left work a little early to make the trek up to Foxwoods.  Typically it is about 1.5 hours from where we live – but on a Friday the traffic going up the coast of CT is brutal.  It took us an extra hour or so to get up there.  I went to pick up our tickets and was told by the box office that they were just informed that the show would be starting at 9pm instead.  Fortunately Foxwoods offers plenty to do if you need to kill time.  We speculated why there was a delay in the show – maybe the opening act canceled, etc.  When we finally entered the venue there was a notice that due to transportation issues, the show would be starting at 9pm.  Boy George then mentioned about how BIG Connecticut was (joking, of course) and that he was in the car for six hours!

I am not all too familiar with the Culture Club song catalog except for the major singles (I’ll Tumble 4 Ya, Do You Really Want To Hurt Me and of course, Karma Chameleon) but all of them were included in the set.  They also did a new song “More than Silence” which is going to be on their new album, Tribes, due to be released early next year and available for pre-order via Pledge Music.  They also did a couple of covers – one being a song Boy George mentioned as being by “Bread” but when it started I turned to my Mom and said “Oh, I know this one. NSYNC does it” – Everything I Own. The other cover was another one I knew – David Bowie’s Starman.

The band played for about 2 hours and Boy George had 4 outfit changes – with 2 of them coming during the encore.  I was on strict instructions to get a photo of “every outfit” so you’ll see below a couple of shots of each.  I have to tell you the photos do not do the first hat any justice. It was the most sparkly hat I think I have ever seen.  And the head piece he started the encore with he said he had to fight Lady Gaga for and it was made by someone who does a lot of her headpieces – but of course, he knew him first!

It was a great show with a lot of the songs having the same message – love and peace.  You can’t go wrong with that. 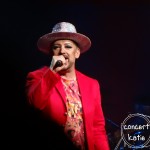 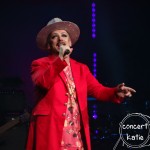 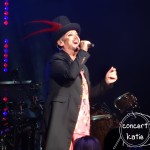 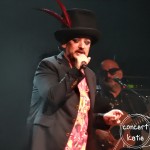 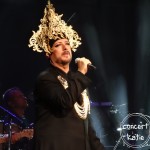 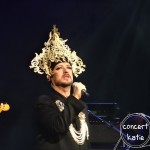 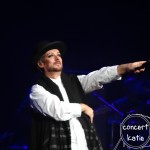 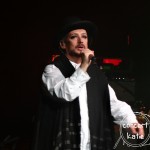 Church of the Poison Mind
It’s a Miracle
I’ll Tumble 4 Ya
Let Somebody Love You
Everything I Own
Like I Used To
Move Away
Black Money
Victims
Human Zoo
Time (Clock of the Heart)
Different Man
Miss Me Blind
I Just Wanna Be Loved
The Crying Game
Do You Really Want To Hurt Me?
Runaway Train