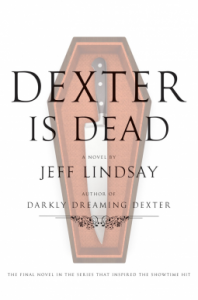 Dexter is Dead is the last season in the book series that led to the Showtime series – Dexter.  I have watched about half of the episodes of the show and read only 1 other book in the series.  There are definitely some differences from the book to the series.

In this final book, Dexter is facing a murder charge. The funny thing is, while Dexter is a serial killer, this crime he actually did NOT commit. His brother Brian comes to his rescue since his sister Deb has decided she wants nothing to do with him after getting custody of his children. The two are on the run and trying to prove that Dexter is innocent. Of course there is all sorts of stuff going on while they are trying to prove everything – but you’ll have to read the book to find out all the details 🙂

I really enjoy these Dexter books, probably because from watching the show I have an idea of what the characters look like and can picture all the characters without having to make up what they look like with my imagination. I’ll have to go back and read the rest when I find myself with some free time.

After seven national bestsellers and eight seasons as one of the most successful shows on television, New York Times bestselling author Jeff Lindsay bids a thrilling farewell to his uniquely twisted and beloved serial killer, Dexter Morgan. Dexter Is Dead is the definitive conclusion of the character who has become a global icon.

Dexter Morgan has burned the candle at both ends for many years. Blood spatter analyst . . . husband . . . father . . . serial killer. And now, for the first time, his world has truly collapsed. Dexter is arrested on charges of murder. He has lost everything—including his wife, his kids, and the loyalty of his sister. Now completely alone, Dexter faces a murder charge (for a crime . . . ironically . . . he did not actually commit). His only chance for freedom lies with his brother, Brian, who has a dark plan to prove Dexter’s innocence. But the stakes are deadly, and the epic showdown that lies in Dexter’s path may lead, once and for all, to his demise.
Jeff Lindsay’s trademark devilish wit and cutting satire have never been sharper. Dexter Is Dead marks the end of a beloved series, but is also Dexter’s most satisfying and suspenseful outing yet.