Book Review: When the Balls Drop

July 3, 2015 by ConcertKatie No Comments 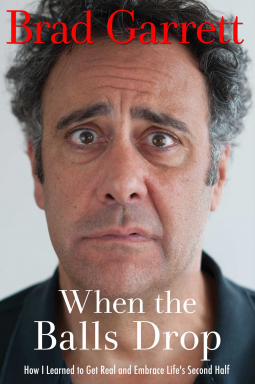 When The Balls Drop is the autobiography from comedian Brad Garrett – who is probably most well known from his role of Robert on Everybody Loves Raymond.

The book talks about the second half of Garrett’s life and things that happen with old age. Obviously geared more towards males than females, it was a funny book.

I liked his story about his kid’s hermit crab walking around without it’s shell – mine did the same thing one morning when I was getting ready for school but fortunately we knew to have an extra shell. Brad did not.

He also teases about his level of “fame” and how most people seem to know him as Kramer from Seinfeld.

If you are a fan of Brad or just looking for something funny to read – then I would suggest you pick up this book.

I received an e-copy of this book in exchange for my review.

A refreshingly candid and wickedly funny look at life’s second half from Everybody Loves Raymond TV sitcom star and comic Brad Garrett.

In this no-holds-barred book of comedic and personal essays, Brad Garrett waxes hilarious—and irreverently honest—about the gaffes, challenges, and ultimately the joys of middle age as he advises us on how to best approach the dreaded “second half” of life.

Ranging in topics from genetics to genitals, weight to women, and dating to diarrhea, Brad leaves no stone unturned in this laugh-out-loud look at getting older. With pieces such as “No Scales in Heaven,” in which Brad points out the essential pointlessness of overthinking diet and exercise, and “Celebrating Your E.D. (erectile dysfunction) During Your Mid-Life Crisis,” the star comedian encourages you to forget the overwhelming concerns that accompany middle age and to welcome the laughs—even if you have a fifty-fifty chance of throwing your back out in doing so.

Penned in Brad’s signature witty, conversational, no-nonsense style that has cemented his status as an icon in the comedy industry, this autobiographical book will teach you the most important thing: that, no matter what, we’re all in this together. So embrace it.