Book Review: The Book of Joan 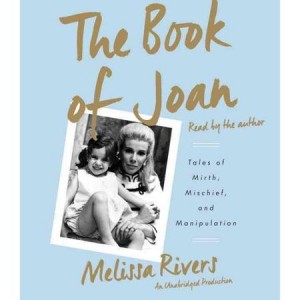 The Book of Joan is about the late Joan Rivers, by her daughter, Melissa.  She tells all about Joan’s life and how she used to embellish, well, everything! From her resume to her phone calls to Melissa after her planes landed when she was traveling.

This book flowed and was easy to read, and was almost as if you were having a conversation with Melissa where she was reminiscing about times with her mother and stories her mother had told her over the years in order to teach her things. It also includes photos and documents over the years – like Joan’s first (heavily embellished) resume and even her childhood report cards!

I received a copy of this book from BloggingForBooks in order to write this review.

Joan Rivers was known all over the world—from the Palace Theater to Buckingham Palace, from the bright lights of Las Vegas to the footlights of Broadway, from the days of talkies to hosting talk shows. But there was only one person who knew Joan intimately, one person who the authorities would call when she got a little out of hand.  Her daughter and best friend, Melissa.


Joan and Melissa Rivers had one of the most celebrated mother-daughter relationships of all time.  If you think Joan said some outrageous things to her audiences as a comedian, you won’t believe what she said and did in private. Her love for her daughter knew no bounds—or boundaries, apparently. (“Melissa, I acknowledge that you have boundaries. I just choose to not respect them.”) In The Book of Joan: Tales of Mirth, Mischief and Manipulation, Melissa shares stories (like when she was nine months old and her parents delivered her to Johnny Carson as a birthday gift), bon mots (“Missy, is there anything better than seeing a really good looking couple pushing a baby that looks like a Sasquatch who got caught in a house fire?”), and life lessons from growing up in the Rosenberg-Rivers household (“I can do tips and discounts and figure out the number of gay men in an audience to make it a good show. That’s all the math you’ll ever need.”). These were just the tip of the iceberg when it came to life in the family that Melissa describes as more Addams than Cleaver. And at the center of it all was a tiny blond force of nature.

In The Book of Joan: Tales of Mirth, Mischief and Manipulation, Melissa Rivers relates funny, poignant and irreverent observations, thoughts, and tales about the woman who raised her and is the reason she considers valium one of the four basic food groups.