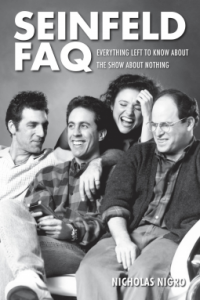 Everything you need to know about the show about nothing. Except that its called FAQ and there’s no questions. One day I guess I’ll figure out why these books are called that! The book is broken down by The Beginning, The Core Four, The Supporting Characters, The World Of Its Own, Episodes, Legacy.  The appendices have information on all the episodes and all the characters, the awards the show won and of course you can’t leave out the team behind creating the show.  If you are a fan of Seinfeld, you will enjoy this book and reminiscing about all of the episodes and characters that were on throughout the years.

Is it a show about nothing or one of the greatest TV series of all time? It’s both, of course! Seinfeld’s impact on popular culture was so profound that it continues to this day-years after it left prime time-thanks to its inimitable characters (Newman! Bubble Boy!), its wacky, memorable plots (who can forget “The Contest” or “The Puffy Shirt”?), and the many catchphrases we use regularly (not that there’s anything wrong with that).

Seinfeld FAQ is the first-ever comprehensive guide to the sitcom, tracing its path from modest beginnings to water-cooler-show status and to its infamous, love-it-or-hate-it finale. This humor-filled reference tells all about Jerry, Elaine, George, and Kramer, as well as the other unforgettable characters in their world. It features season-by-season episode reviews and a wealth of fun facts about everything from the characters’ inevitably doomed relationships to their food obsessions and fashion sense (or lack thereof) as well as profiles of actors and other notables.

Broad in scope and yet obsessed with detail (like the show itself), this FAQ is essential reading for anyone who wants to be master of the Seinfeld domain