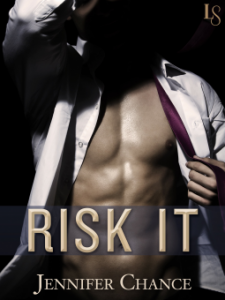 I had previously read one of the other books in this series, Want It. I enjoyed it so when I was asked to read Risk It, I agreed. I found the book got off to a slow start (and checked Good Reads and a lot of the reviews were low stars) but I decided to stick with it because I don’t like to not finish books unless they are quite awful. I am glad I stuck this one out because at about 1/4-1/2 way through things picked up a bit and I got more into it.

I wasn’t as into Rand and Dani’s relationship as I could have been, but I did like the sub plots a lot more. Rand and Dani couldn’t be more different – Rand is rich and Dani is a thief! But somehow Rand convinces Dani that she should spend a night with him instead of a night in jail and it evolves into a game of 30 days with him. There seems to be an attraction but Dani is fighting it – just out to get the money to help her brother – who won’t tell her why he needs it.

A nice summer read – just make sure you stick with it if you think it’s dragging a bit in the beginning!

Jennifer Chance’s Rule Breakers series turns up the heat as a wealthy playboy and a beautiful con artist engage in a high-stakes game of seduction.

As dominating in business as he is in bed, Rand Sterling Winston IV always gets what he wants. And even before he realizes that she’s scammed him into paying triple the cost for her friend’s painting, he wants Dani Michaels. To catch her alone, Rand demands that she personally deliver his purchase. The attraction between them is immediate and electric, and he knows she feels it, too. So when the part-time petty thief rebuffs his advances, he gives her a choice: a night in jail or an evening with him.

Despite her checkered past, Dani has never met someone like Rand: brooding, intense, and oh so tempting. Only a man with a broken soul could make control feel this dangerous. Still, when Rand proposes a no-strings, no-holds-barred affair, Dani’s more than a little intrigued. It’ll be the trickiest con she’s ever run and a chance to indulge her steamiest fantasies—nothing more. But as their encounters grow increasingly intimate, Dani uncovers a vulnerable side to Rand’s steely exterior and opens her heart to the ultimate risk.