July 3, 2015 by ConcertKatie No Comments 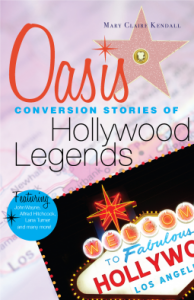 Oasis is the portrait of 12 Hollywood Legends and their conversion to the Catholic faith.  Some of the legends included in the book are Alfred Hitchcock and Bob Hope. It was interesting to see how these stars – who seemingly had it all, were still missing something in their lives and how their lives changed after they embraced God and faith.

Highlighting legends such as Mary Astor, John Wayne, Alfred Hitchcock, Spencer Tracy, Lana Turner, Gary Cooper, Patricia Neal, Betty Hutton, and Bob Hope, Oasis: Conversion Stories of Hollywood Legends uncovers stories of recovery and conversion—intimate portraits that often contrast with the more common profiles of these all-too-human stars. Many were touched by infidelity, alcoholism, unbridled ambition, or other moral failings that often seem to characterize life in Hollywood. Some had deathbed conversions, others underwent a gradual process of conversion; each found solace in embracing the Catholic faith.

While taking nothing from their fame, Oasis: Conversion Stories of Hollywood Legends shows that even those who seem to have it all need the hope, strength, and fortitude provided by faith.