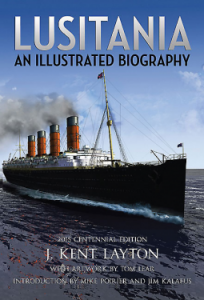 Lusitania is an illustrated biography about the ship that sunk 100 years ago on May 7, 1915. The book goes through her birth, career and her last days. There are some notes from survivors and since it is illustrated there are a LOT of photos. (In fact, it almost seemed like it was too many photos for my Nook to handle!) The book also contains passenger lists, crew lists, and basically everything you’d ever want to know about the Lusitania. (I’m not sure why I am so fascinated with the Lusitania, but I am, since I first learned about it in school.)  The end of the book contains some colorized photos which was a nice surprise!

If you want to know more about Lusitania or you don’t know much about it at all – either way you’ll leave this book knowing her entire story. Take a journey back in time and find out about this ocean liner.

It is now over a year since the Lusitania made her maiden crossing of the North Atlantic. For seven and a half years, she crossed that rugged ocean with punctuality and dependability. She fast became a living legend, the ship of choice for many of the transatlantic travellers. Since her sinking on 7 May 1915, however, her wondrous career and technological marvels have largely been neglected. Instead, the focus has shifted to her political importance, and on numerous conspiracy theories about her last voyage and sinking.]

This illustrated biography of the Lusitania discusses her entire story, from her conception and birth on the Clyde to her career and, finally, her tragic demise off the coast of Ireland; it reveals her as she has never been seen before.

Prepare to take a journey back in time … step aboard the decks of one of the world’s largest, finest, fastest and most beloved ocean liners, and relive her history in all its splendour.