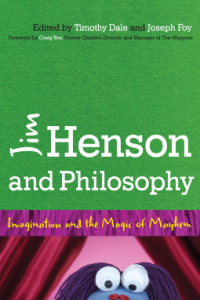 Jim Henson and Philosophy is a book made up of various essays about Jim Henson’s characters and their relation to Philosophy.  Henson tried to make monsters less scary with his group of misfit muppets. Miss Piggy is a strong female character.  This book features ALL his characters – not just the Muppets – including Fraggle Rock and the movie Labyrinth.  It talks about how Sesame Street makes learning fun.  It is nice to read all the different thoughts from all the different authors in their essays.  There is definitely more to these characters than meets the eye.

Jim Henson’s creations have inspired generations with characters that are among the world’s most recognizable cultural icons. From Kermit the Frog, Miss Piggy and their Muppet friends, to the legendary Sesame Street and the Children’s Television Workshop, Henson has immeasurably impacted the growth, development and substance of children’s educational entertainment. Combining live-action and puppeteering into fantastical narratives like The Dark Crystal and Labyrinth, and the whimsical Fraggle Rock and The Storyteller, Henson transforms imagination into reality, weaving powerful philosophical messages on identity, community, diversity, love, death, and friendship. Henson’s legacy endures because he never shied away from exploring deep questions, nor underestimated the ability of children (or adults) to grapple with profound philosophical questions. Anyone who grew up with his stories, or has fallen in love with his characters, will enjoy this book’s exploration of the entertaining, educational and profound world of Jim Henson.

Timothy M. Dale is an assistant professor of political science at the University of Wisconsin–La Crosse, where he teaches courses on political philosophy. He is coeditor of the collections Homer Simpson Ponders Politics: Popular Culture as Political Theory (2013) and Homer Simpson Marches on Washington: Dissent in American Popular Culture (2010).