Book Review: How to Catch a (Rock) Star 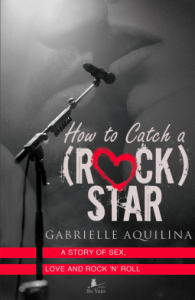 You probably can’t tell from the blog – but it has been almost a month since I read a book for review. (Gotta love wordpress allowing me to schedule posts in advance!) It wasn’t a tough choice to decide what to read next since this one had to be posted before any of the rest based on my schedule – but I’m glad that it ended up being the next on my list. My reading break was part due to being too busy to find time to read and part due to the fact that a lot of the books I was reading just weren’t doing anything for me lately.

How to Catch a (Rock) Star is about Lillie who is an aspiring singer living in the UK.  She meets Jed, an American rock star and they hit it off.  Of course, how much time they can see each other is a bit limited with Jed being on tour.  Jed decides he has the perfect idea and has Lillie basically join his band to sing with him on tour. Everything seems to be going great for the two of them – but can it last? Well, of course there probably wouldn’t be a book if everything was all happy all the time and they ended up happily ever after, right?

Turns out Jed is keeping a secret from Lillie – one that she isn’t sure she can handle after being in a similar situation with an ex.  But Lillie’s dreams are coming true – so what can she do to make sure that she can continue living her dreams – with or without Jed?

I liked this book a lot – it was very well written and I enjoyed all of the characters. (And it turns out there will be a second book following another one of the band members so I will have to keep an eye out for that one too!) It is a romance book but didn’t have a lot of the sex scenes you might be expecting (which was a bit of a con, but at the same time also a pro.) I think that rockstar romances are my new favorite sub-genre and if Gabrielle Aquilina keeps it up with this series I will not be disappointed!

Aspiring singer Lillie and American rock star Jed seem like the perfect fit from the moment they meet. The pair are inseparable, but Jed’s jet-set schedule of shows and after-parties limits the amount they can see each other. So when Jed invites Lillie to sing with his band on their tour, she says yes. Yes with some hesitation, that is. After finding out that her ex-boyfriend was hiding away a wife and child when they were dating, Lillie’s trust in men is fragile and she also suffers from severe stage fright. As the tour progresses, Jed and Lillie are fast becoming rock’s hottest couple but with obsessive fan girls, a claustrophobic tour bus and a resentful guitarist, things start taking a turn for the worse. Lillie’s dream of singing may have finally become a reality, but can it last? The odds are stacking up against them and then the unthinkable happens…
The book is the first one of a series. The second book will follow the story of Johnny, Jed’s best friend.