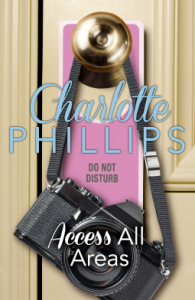 Access All Areas is a nice short book that I really enjoyed reading! It has 10 chapters and clocked in at just under 100 pages so it was a nice afternoon read. The book is about Anna, a photographer who is dealing with the death of her father just a few months after the death of her mother and realizing that she may end up losing her house if she cannot come up with some major money and FAST.  Her friend Lucy works at a hotel and knows that there is a film star staying there with her new boy toy.  No one else really knows and a paparazzi shot of the two of them would make BANK.  Lucy helps Anna get inside a vacant room that is across from the stars room and Anna ends up getting stuck hanging out the window and is considered a suicide risk.  Then she gets caught again trying to sneak in dressed as a maid.

Somehow despite her breaking all his rules, the head of security, Jack, ends up taking her camera and then taking HER back to his place for the night! She sneaks out in the morning and finds her camera so she grabs it.  This leads to Jack thinking she was just using him for the camera, but she tells him no and ends up hooking up with him again – this time in his office.

She ends up in the right place at the right time and snaps a photo of the two on her cell phone – and another member of security takes her camera which of course has nothing on it.  Worried that selling the photo may put Jack’s job at risk since they think he may be the leak who told Anna about the star being there, she decides to instead rent out her house to try and make some extra income.

But then she finds out that Jack has quit and she can sell the photo – except for the fact that… well… you’ll have to read the book and see what happens.

This was a quick read, romantic and I really liked the characters.

Sexy, addictive and just pure fun, don’t miss the next installment in the Do Not Disturb series!
After losing her elderly parents, portrait photographer Anna will do anything to avoid losing the family home – the only thing she has left of her perfect childhood.

When a friend who works at the exclusive boutique hotel, The Lavington, provides a hot tip – an A list film star is staying there with her rumored toyboy lover – Anna comes up with a plan. A photo of them together could be the answer to all Anna’s money problems.

Unfortunately, she’s the worst paparazzi photographer on the planet and Jack, the hotel’s new head of security, back in England after globetrotting as bodyguard to the stars, isn’t about to allow a picture on his watch. No matter how cute the photographer might be…