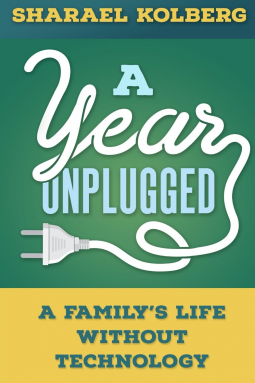 A year unplugged is about a family of 3 who take a year off from all  technology – with some rules. They won’t have a TV in their house – but if they’re somewhere with a TV they can watch it – and apparently they can decide to spend the night in a hotel room if they want to watch the American Idol finale. (I get that it’s awful to miss American Idol but spending the night in the hotel JUST for the TV seemed like cheating to me!).  They no longer use smart phones and instead have a cellphone for emergencies only. No digital cameras – film only. No video games – unless you’re at a friends house. No iTunes or iPods – only the radio or CDs – or as they ended up using, records and a record player.  No computer means no email, internet, ebay, online banking, social networking (are you cringing yet?) no map sites, no wordprocessing (Mom was using a typewriter for a bit!).   Technology can only be used for work purposes since they still need to make a living – but with no internet at home they’d have to check work email at work or at the library.

I know I would not last a DAY with these rules – let alone a YEAR. (I could mayyybe survive a week – if I was on vacation somewhere and had enough distracting me and limited wifi).  They implemented their rules over a two week period so each day something else left until they were technology free.

The book chronicles their year – a lot of their friends and acquaintances just don’t seem to understand what they are doing and it seems like they are missing out on a lot.  The husband has been using his iPhone as an address book for 5 months before he gets “caught” and told that is against the rules and he needs to use a planner.  At 6 months the husband explodes over no internet at home so he can not get work done – causing them to revise the rules.  The 3rd member of the family is their 6 year old who seems to be the most spoiled brat.  Taking away technology? Let’s buy her all of the toys! (And a dress. And maybe a guinea pig. And whatever else she sees that she wants.)

I must commend them for sticking it out for the whole year, but also think they are nuts for even attempting it!

I received an e-copy of this book in order to write this review, I was not otherwise compensated.

In A Year Unplugged, Sharael Kolberg chronicles her family’s brave attempt to wean themselves from technology in an effort to reclaim quality family time. The Kolbergs decided to turn off their television, unplug their iPods, iPhones, laptops and digital cameras, and disconnect from e-mail, cell phones and the Internet. Not an easy task.

Sharael’s true-life tale explores how dependent we are on technology and the impact it has on interpersonal relationships and society. Through thought-provoking, humorous and heart-wrenching narrative, Sharael hopes to compel readers to open dialogue about the conscious use of technology.