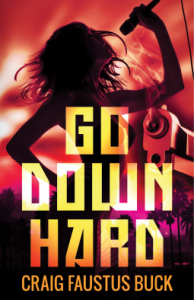 Go Down Hard is about Nob Brown an ex-cop who is now a writer trying to make ends meet and pay spousal support to his ex-wife so he doesn’t lose his house. With the 20 year anniversary of Lana Strain, a popular musician who was murdered and the case never solved, coming up, Nob’s best friend Gloria gives him the files to the case and tells him to have them back to her in a week. Nob pitches a story to Playboy and is told they’ll give him $3,000 if he writes it without figuring out who the killer was and $20,000 if he can figure out who the killer was.

Nob is on the case and ends up meeting Lana’s daughter Ginger and asking her about the case and is then introduced to Ginger and her sister Sophia’s father Billy. As Nob begins to try and unravel the story to who kills Lana, things get tense. Ginger ends up dead – a murder that seems to be set up to look like a suicide. Suspects seem to be coming out of the woodwork and things are getting more and more dangerous. Will Nob end up figuring out who did it before they get him too?

I am sure that my synopsis of this book doesn’t do it justice. It is a long book, 77 chapters, and it took me about 4 days to read, but I didn’t really want to put it down (but I HAD to). There are a lot of characters but it’s not too hard to follow along to see who is good and who is bad (most of the time) and you can’t help but root for Nob to solve this murder – not only because he’s getting close to figuring it out but also because he seems like a good guy and he needs the payout!

About the book
Nob Brown is a divorced, disillusioned thirty-something ex-cop turned bottom-feeding tabloid writer. His best friend and occasional lover, Gloria Lopes, is an LAPD detective who needs an Excel spreadsheet to chart her sex life. When Gloria slips Nob the confidential file on the unsolved twenty-year-old murder of a legendary rock-and-roll goddess, Nob hopes to solve the crime and propel himself out of the tabloids and into a lucrative book deal. But he pokes into the wrong holes and unearths rotting secrets that give rise to fresh corpses. As the cold case comes to a fast boil, Nob is forced to battle for his own survival.