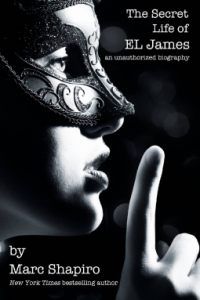 If you don’t know who E.L. James is – please let me know what rock you have been hiding under. (kidding, kind of) She is the author of the wildly successful “Fifty Shades of Grey” series which has most recently turned into a movie franchise.  She is a middle-aged mother and wrote the story based on characters from Twilight – it started off as a fan fiction and turned into something much, much more.

It talks about how Erika’s husband was incredibly supportive when she started writing at home and he even took over some of her house chores like cooking dinner to help out. It talks about how she was writing with two sons in the house – and how sometimes they’d pop up and be behind her so she’d have to turn off the screen so they couldn’t see what she was writing.

If you’re interested in finding out more about the author and what made her write these stories and how she went about doing it and finding out pretty much everything you’d like to about her life – then The Secret Life of EL James is for you.

I received an e-copy of this book in exchange for an honest review.

About the Book
Everyone wants to know how EL James, a middle-aged mom of two from the London suburbs became the best-selling author of all time, with over a million books selling worldwide in less than a year, and now a major motion picture.

Read this book to find out exactly how she did it.

Inside you’ll learn how she wrote her first draft based on Twilight fan fiction, and how she rewrote it as the book we know and love today, the rough and tumble process of editing, and how she assembled a group of dedicated fans herself that brought this smutty masterpiece to the rest of the world,

NY Times best-selling biographer Marc Shapiro uncovers the inspiration and secrets behind this writing sensation, explaining how she did it with exclusive interviews with her editors and early fans.