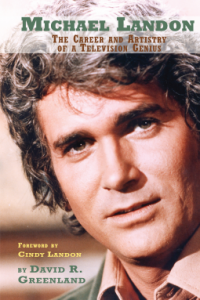 Michael Landon is a biography on the great actor.  Michael was always one of my mom’s favorite actors so I remember watching lots and lots of episodes of Highway to Heaven and Little House on the Prairie as a child.  Michael was born Eugene Maurice Orowitz to a mother that was suicidal. Michael didn’t often like to be home so he would run off and beg for money to help out the other beggars (it was easier for a kid to get money than adults) and used a lot of his experiences growing up when he was writing later in his career.  Once he left his character on Little House on the Prairie, his daughter actually had a part on the show.  Michael died of cancer in 1991.  This book focuses on his professional life and not so much on his private like a typical biography does, but he had such an amazing career that you won’t want to miss out reading all about it.

MICHAEL LANDON: Actor, Writer, Director, Producer For over three decades, Michael Landon’s creative gifts touched millions of viewers around the world on Bonanza, Little House on the Prairie, Highway to Heaven and in several other productions. This is the first detailed examination of his work both in front of and behind the camera, including information about every Landon script. Among the illustrations are some rarely seen photographs. “I am grateful that one of Michael’s greatest admirers has devoted an entire book to a serious study of his productions, and I hope readers will appreciate David Greenland’s efforts as much as I do.” – CINDY LANDON