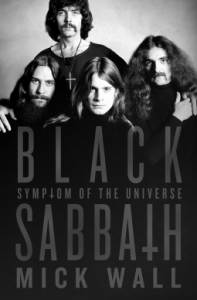 Black Sabbath: Symptom of the Universe is all about the band Black Sabbath and their career over the years. They were basically a bunch of dummies who were just trying to make some money to get out of the slum.  They were always fighting and always had their share of drama going on within the band.  Ozzy split from the band early on and then did various reunions with the band afterwards. Ozzy’s image was changed when he did his reality TV show with his family.  The book has a lot about sex, drugs and rock n roll – which I guess is to be expected 😉  The book has very long chapters and is full of a lot of great information about the band.  The end of the book has some great photos of the band through the years.

This is a really thorough book and has just about anything and everything you’d want to know about the band.  I received a free e-copy in exchange for this review.

Decades before reality television was invented, Ozzy Osbourne was subversive and dark. Ozzy was the singer in the heavy metal band Black Sabbath, and they meant business. In an era when rock bands were measured by how ‘heavy’ they were, no one was weightier than Black Sabbath. All four founding members of the original Black Sabbath grew up within half-a-mile of each other in a tiny Birmingham suburb. Though all shared a deep love of music–The Beatles for Ozzy, the Mothers of Invention for Geezer, the Shadows and Chet Atkins for Iommi, and Gene Kruppa for Ward– they formed their group “as the quickest way out of the slums.” This is the story of how they made that dream come true–and how it then turned into a nightmare for all of them. At the height of their fame, Sabbath discovered they’d been so badly ripped off by their managers they didn’t even own their own songs. They looked for salvation from Don Arden–an even more notorious gangster figure, who resurrected their career but still left them indebted to him, financially and personally. It finally came to a head when in 1979 they sacked Ozzy: “For being too out of control–even for us,” as Bill Ward put it. The next fifteen years were a war between the post-Ozzy Sabbath and Ozzy himself, whose solo career overshadowed Sabbath so much that a reunion was entirely on his terms. Or rather, those of his wife and manager–to add a further bitter twist for Sabbath, daughter of Don Arden –Sharon Osbourne.