Book Review: Beneath The Surface 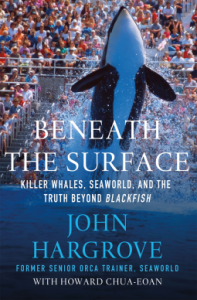 I feel like I should preface this review by saying I have not seen Blackfish and I am not sure if I intend to see Blackfish.  John Hargrove used to be a trainer at Sea World (and worked with orcas in other locations as well) but has since retired as of 2012 and appeared in Blackfish.  The first half of the book is about how working with the whales was always John’s dream growing up and how he worked very hard to make sure that he was able to achieve it.  He talks about Orcas and how they know if they have been separated from family and get upset over it and there is an especially strong bond between mothers and daughters.  The second half of the book talks about how the whales live in captivity and how he doesn’t think that they should anymore. The whales are no longer captured, instead they are bred by artificial insemination. He also talks about how he had developed a pain killer addiction after being injured by one of the whales.

I am not sure how I feel about the whole situation – I can see both sides and I love going to SeaWorld.  I know a lot of their employees love the animals they work with and want them to stay safe.  I also know that you can’t just release these whales into the wild. Most of them were never out in the wild and would have no idea how to survive.  John agrees with this.  I do hope that there can be a happy medium found, if there is one.

Over the course of two decades, John Hargrove worked with 20 different whales on two continents and at two of SeaWorld’s U.S. facilities. For Hargrove, becoming an orca trainer fulfilled a childhood dream. However, as his experience with the whales deepened, Hargrove came to doubt that their needs could ever be met in captivity. When two fellow trainers were killed by orcas in marine parks, Hargrove decided that SeaWorld’s wildly popular programs were both detrimental to the whales and ultimately unsafe for trainers.
After leaving SeaWorld, Hargrove became one of the stars of the controversial documentary Blackfish. The outcry over the treatment of SeaWorld’s orca has now expanded beyond the outlines sketched by the award-winning documentary, with Hargrove contributing his expertise to an advocacy movement that is convincing both federal and state governments to act.
In Beneath the Surface, Hargrove paints a compelling portrait of these highly intelligent and social creatures, including his favorite whales Takara and her mother Kasatka, two of the most dominant orcas in SeaWorld. And he includes vibrant descriptions of the lives of orcas in the wild, contrasting their freedom in the ocean with their lives in SeaWorld.
Hargrove’s journey is one that humanity has just begun to take–toward the realization that the relationship between the human and animal worlds must be radically rethought.