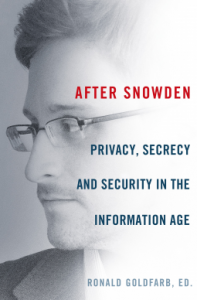 After Snowden is a book of essays analyzing the effects of Snowden in the information age.  There are 7 essays written by various experts looking into: The Press, Protected News in the Era of Disruptive Sources, What Should We Do About the Leakers, Judging State Secrets: Who Decides – And How?, The Future of Privacy in the Surveillance Age, and Secrecy, Surveillance and the Snowden Effect.

I admittedly have not really been following this as closely as I probably would have been had it happened several years ago when I was in college and studying Journalism. However, I think that the essays all make very good points and certainly gave me a lot to think about in regards to what ramifications there will be based on these leaks.

Was Edward Snowden a patriot or a traitor?
Just how far do American privacy rights extend?
And how far is too far when it comes to government secrecy in the name of security?
These are just a few of the questions that have dominated American consciousness since Edward Snowden exposed the breath of the NSA’s domestic surveillance program.
In these seven previously unpublished essays, a group of prominent legal and political experts delve in to life After Snowden, examining the ramifications of the infamous leak from multiple angles:
• Washington lawyer and literary agent RONALD GOLDFARB acts as the book’s editor and provides an introduction outlining the many debates sparked by the Snowden leaks.
• Pulitzer Prize winning journalist BARRY SIEGEL analyses the role of the state secrets provision in the judicial system.
• Former Assistant Secretary of State HODDING CARTER explores whether the press is justified in unearthing and publishing classified  information.
• Ethics expert and dean of the UC Berkley School of Journalism EDWARD WASSERMANdiscusses the uneven relationship between journalists and whistleblowers.
• Georgetown Law Professor DAVID COLE addresses the motives and complicated legacy of Snowden and other leakers.
• Director of the National Security Archive THOMAS BLANTON looks at the impact of the Snowden leaks on the classification of government documents.
• Dean of the University of Florida Law School JON MILLS addresses the constitutional right to privacy and the difficulties of applying it in the digital age.