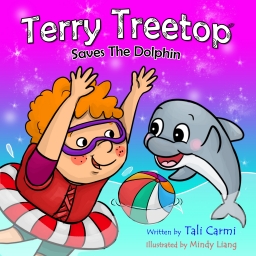 Terry Treetop liked to watch the dolphins from the top of the tree, which is how is got his name.  He sees a baby dolphin playing with the other dolphins and names him Dido.  He wants to play with the dolphins, so he goes down to the dock and yells out to them.  The baby dolphin swims closer to him and gets caught in a net swimming to Terry.  Terry knows that he needs to get help to get the dolphin out of the net.  The ranger helps to free Dido and gives Terry an inner tube so that he can go in the water and swim with the dolphins.  This was a cute story to teach kids about the environment and how nets in the water can affect the dolphin’s lives.  It also has great illustrations!

Want your kids to care about the environment?
Take them on an adventure in a marine nature reserve
This is the fourth book in the Terry Treetop best sellers series. In this book Terry Treetop went camping with his parents to a marine nature reserve. He saw a cheerful group of dolphins and wanted to play with the little dolphin, but something went wrong and the little dolphin was in danger.
Will Terry be able to save the little dolphin?
This beginner reader’s eBook will teach your child about marine mammals and their habitats, and will inspire your kids to be aware of the environment and the responsibility of humans towards animals in their care.
Your kids will enjoy full-color illustrations of Terry and the dolphins group.
Terry Treetop Saves The Dolphin is a sweet children’s book written especially for you and your kids ages 2- 8.
With simple text and 16 colorful illustrations.
The story is suitable as a read aloud book for preschoolers or a self-read book for beginner readers.