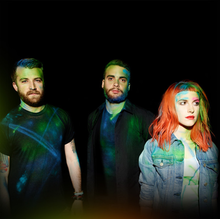 Fast In My Car
Now
Grow Up
Daydreaming
Interlude: Moving On
Ain’t It Fun
Part II
Still Into You
Anklebiters
Interlude: Holiday
Proof
Hate To See Your Heart Break
(One of Those) Crazy Girls
Interlude: I’m Not Angry Anymore
Be Alone
Future


I’ve been hearing a lot of great things about Paramore lately, so I figured it might be time that I listened to a full album of theirs.  Late last year they released a Deluxe version of their self-titled album.  Unfortunately, I couldn’t get into it.  I was listening to it while doing some work on my computer (which is really how I listen to most of my music – it’s almost always the radio when I am in the car on the way to/from work unless it’s an extended road trip when the radio repeating itself quickly gets on my nerves) and the only songs that got me to perk up even the slightest were Ain’t It Fun and Still Into You – probably because I knew these from the radio.  I also seem to have a hard time getting into female singers (that aren’t 90s pop princesses, I guess) so that might have some to do with it as well.

I’ll probably give this album another chance at a later time to see if I still feel the same – but for right now I’m giving it 3 out of 5 stars.