Book Review: Around The World in 50 Years 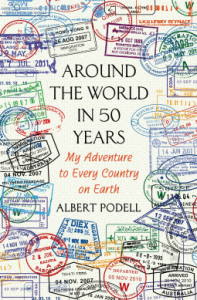 As someone who loves to travel, I was thrilled to get the chance to read Around the World in 50 years. It is about Al who decided to try and visit EVERY country. The book is made up of 30 chapters and chronicles 72 journeys over the course of 50 years.  The stories include adventure, unpredictable animals, a friend named God and some unusual food (dog and monkey brains?).

At first Al wanted to be the first to travel in a longitudinal direction around the world but then decided he would try to visit every country. Which made him ask – just how many countries ARE there?  Plus with the changes in countries through the years he had to do a few “revisits” of sorts.  He is far more dedicated to this traveling than I am – a lot of these countries I wouldn’t want to visit no matter the circumstances.

I particularly liked the story he told about how he bought some Times Square shirts to give away and trade with. People seemed to like them – but some wanted his hat, a Mets hat. He refused to give it up!

This is the inspiring story of an ordinary guy who achieved two great goals that others had told him were impossible — first by setting a record for the longest automobile journey ever made around the world — in the course of which he blasted his way out of minefields, survived a breakdown atop the Peak of Death, came within seconds of being lynched in Pakistan, and lost three of the five men who started with him, two to disease, one to the Vietcong.

After that — although it took him 47 more years – Albert Podell set another record by going to every country on Earth. He achieved this by surviving riots, revolutions, civil wars, trigger-happy child soldiers, voodoo priests, robbers, pickpockets, corrupt cops, and Cape buffalo. He went around, under, or through every kind of earthquake, cyclone, tsunami, volcanic eruption, snowstorm, and sandstorm that Nature threw at him. He ate everything from old camel meat and rats to dung beetle and the brain of a live monkey. And he overcame attacks by crocodiles, hippos, anacondas, giant leeches, flying crabs — and several beautiful girlfriends who insisted that he stop this nonsense and marry them.  Albert Podell’s Around the World in 50 Years is a remarkable and meaningful tale of quiet courage, dogged persistence, undying determination, and an uncanny ability to extricate himself from one perilous situation after another — and return with some of the most memorable, frightening, and hilarious adventure stories you have ever read.