January 5, 2015 by ConcertKatie No Comments 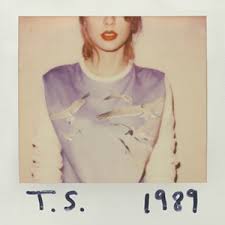 
Taylor Swift released her 5th studio album, which is her first non-country album and first full on pop album.  At first I was afraid to listen to the CD because I was afraid I would actually like it, being pop and not country.  But then I brought myself to listen to it and nope – still not a Swifty fan.  The album has a real 80s vibe and was named after the year she was born.  (Crazy to think she is as old as my little brother – as she acts so much younger!)  Some of the controversy surrounding this album release (a PR stunt, no doubt) was about how Taylor likes to write songs about guys she has dated and gets called out for it when male artists like Ed Sheeran and Bruno Mars do the same about girls and do not get called out on it.  Well.  Here’s my thoughts on the matter.  I would say I am a bigger Ed Sheeran fan than I am a Taylor Swift fan, by far.  But I can tell you many, many, many, many guys that Taylor has dated and maybe ONE that Ed Sheeran has been linked to.  Ed doesn’t put cutesy clues in his linear notes to “decode” who the songs are about and bring attention to it.  He writes about girls and you’re never the wiser who is he talking about and I’ve never really heard him name names in interviews either.  Same for Bruno.  While there may be a double standard – Taylor is also playing into people finding out who the songs are about and then playing the victim when they call her out on it.

Back to the album – here are some notes that I wrote.  Welcome To New York has a very 80s vibe.  Wildest Dreams reminds me of another song and I cannot put my finger on it (and it may have been driving me crazy).  Out of the Woods the beginning reminds me of NKOTB for some  reason (though it makes sense… 80s.)  I did like the line in New Romance about making a castle out of all the bricks thrown at her.   I didn’t like that she does the talking mid song. I think that is dumb when anyone does it.  I also liked at the end how there were voice tracks of her explaining how some of the songs came about with some demo recordings mixed in.

1989 is the ONLY album to go Platinum in 2014 and I think that shows you what a sad state the music industry is in.  Many albums are being downloaded for free instead of bought and it is very difficult to get the numbers that bands used to get in the late 90s/early 00s now.  So the fact that her team was able to get her so many actual album sales is impressive.  I also will say I admire her for speaking out about Spotify.  Of course, she is in a position where she doesn’t NEED the money that spotify brings in, and other indie artists do need the money (although they get very little – about half a million spins equals to what they would make if they sold one physical album) and the publicity through people hearing their music on this outlet – but maybe it will bring about a change to make things a bit more fair for the artists again.