One of the features of the Silhouette Cameo is that you can do “Print and Cut” which is exactly what it sounds like.  You import photos (in my case, I imported elements from digital scrapbook kits) and can then print them out using your printer and then cut out around the outline using the Cameo.

What you need to do when you open your new page in the studio software is to go to the registration marks icon (It is a page with marks in each corner, 4th from the right on my setup) and turn the registration marks ON. (If you are using the Cameo or Portrait be sure to select Type 1 – I didn’t my first time and had cuts that were not where they should be) 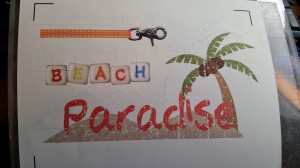 You can kind of see that the cut marks are nowhere near where they should be because I had the wrong registration marks cut! If using the Cameo, one of the corners should be a black box.

You can’t put anything over the dark marks/square in the corners. I’m not sure if you can put anything in the crisscrossed lines. I’ve seen in tutorials people having items placed there but I’ve yet to try it for myself to know for sure.

Send it to your printer and then load it into your Cameo. (Or give it a bit for the ink to dry if you’re paranoid.)

When you send it to the Silhouette it will look for the registration marks.  If it fails on the first try – add more light.  Open your blinds, turn on an overhead light or shine a flashlight right on to the carriage.  If the machine can’t find the registration marks, it won’t be able to match up and know what to cut.  (Also you may need to use the “Trace” feature in order to get the outline of your images to cut out instead of just a square around them.)

Overall this is a nice feature to have, but I’d much rather paper piece than just print and cut out around things. (It seems silly to buy a machine to use this feature when you can do pretty much the same with a printer and an exacto knife!) 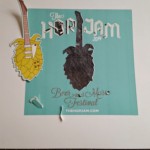 Another partial print and cut fail. The guitar came out fine, but the text was a bit too tiny. I ended up taking the text and making it much, much bigger and it came out a lot better. Look for it in the May scrapbook post coming sometime in 2015! 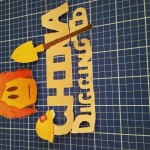 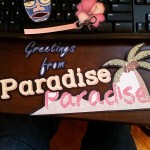 A few scrapbook kit items cut out. I still need to work on how to cut out the insides of letters when doing print and cut – it worked in some cases (Paradise) but not others (Greetings from)